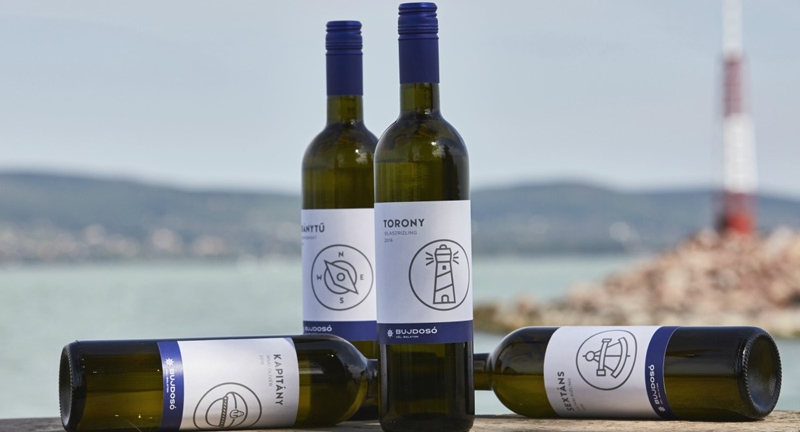 The South Balaton Bujdosó Winery has renewed their "Sailor" series of wine labels this fall. The theme of course remains Lake Balaton and sailing, which is important to the Bujdosó family. The labels were designed by Géza Ipacs again.

Balaton and Sailing on the New Bujdosó Wine Labels.

When the winery first sought out Géza Ipacs in 2011, it was immediately apparent that the concept and label design that would be perfectly suited to them would be the topic of sailing, since the family is inseparable from the Balaton and sailing. The Bujdosó Brothers have been sailing since their childhood, and since then their passion has never waned, which is not a problem, since sailing is well suited to the vineyards and vineyards near Lake Balaton. The brothers are permanent participants in local competitions, including the famous Blue Ribbon, but they also regularly take part in competitions on the Adriatic. It was not difficult to recognize that their own story is particularly well-suited to them, therefore, in addition to the previously colorful graphics of the Sailor series, they also named their premium wines after the most classic, elegant sailboats on Lake Balaton, including Sirocco, Nemere and Tramontana.

The current multi-colored, illustrated motifs have been replaced by an icon-like appearance, and the centralized layout was replaced by a diagonal one. Previous labels did not include a color coding, which is one of the decisive elements of the new image. The decision, of course, fell to the color blue, and more specifically to navy blue, as in for example, the well-known striped sailor T-shirts. The main motifs remain the Balaton and sailing. The typography became tighter and the Bujdosó logo was placed in the lower part of the label in a blue band, making it stand out a bit more.
"The end result is a more uniform and cleaner brand. I think that the new label family promotes the strengthening of the Bujdosó story "- said Géza Ipacs, justifying the new changes.
Back More news