Our special awards go to...

... those outstanding individuals who have excelled in their field. 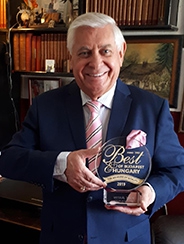 Tibor Meskál is a real old-fashioned gentleman, who spent half of his sixty-year career abroad working in some of the most prestigious hotels in the world. He served drinks to Queen Elizabeth II on three separate occasions, as well as the Shah of Persia, Frank Sinatra and Marlene Dietrich, among others. In Budapest, he cherishes a very special relationship with Corinthia Hotel where he works as senior duty manager and where he occasionally guides ‘Behind the Scenes’ tours.

Hoteliers of the year in Budapest
Sameer Hamdan and Zuhair Awad

Sameer Hamdan and Zuhair Awad are the owners of the Mellow Mood Group who, not long ago, were decorated with one of Hungary's highest State Orders, the Knight's Cross of the Order of Merit, for their accomplishments in Hungarian hotel development, in which they have been involved for more than 20 years. Their company, which initially operated youth hostels, today features 12 hotels, including the newly opened luxurious Párisi Udvar Hotel Budapest.

Hotelier of the year in the countryside
Pál Poncsák

Pál Poncsák is the General Manager of Avalon Resort & SPA, a family entertainment and adventure center built in Miskolctapolca, in the heart of the Bükk Mountains. The former steel town and its area has recently become one of the most sought-after countryside destinations in Hungary, attracting tens of thousands of tourists with its natural environment, baths and cultural programs. Avalon Resort & SPA is a key tourism establishment in the region, employing over 150 local people.

Restaurateurs of the year in Budapest
Csaba Csongrádi, Andor Giczi and Szabolcs Nagy

Csaba Csongrádi, Andor Giczi and Szabolcs Nagy are the owners of Fricska (that translates to ‘Flick’, with a clear message of ‘being saucy’), a small restaurant or more precisely, a Gastropub established in a cellar in district 7, with the goal of reviving 20th-century bourgeois cuisine with a modern edge.

Restaurateur of the year in the countryside
Rita Ásványi

Currently living near Perpignan in France, HR specialist Rita Ásványi owns and runs a 300 year old family heritage water mill in Hosszúhetény (a tiny village near Pécs in Southern Hungary), which she had transformed into a restaurant, event venue & museum. Named 'Almalomb, Culinary Retreat and Meeting Place', the old mill is a cultural and culinary delight, and a prime wedding location for those seeking romance.

Chef of the year
István Veres

The talented chef of the Michelin star Babel Budapest is the latest winner of the Hungarian final of Bocuse d’Or international chef competition.

Roland Holzer is the Executive Chef at the Kempinski Hotel Corvinus Budapest, who is also responsible for catering the events held in the hotel’s Ten Rooms event center, as well as all events served by The Kitchen Caters.

Pâtissier of the year
Attila Menyhárt

Attila Menyhárt, chief pâtissier of Budapest’s Four Seasons Hotel Gresham Palace, is a detail orientated professional with a flair for creating luxury desserts, who blended macaron and mille feuille so tastefully that he was included in the magazine ‘So Good’ – something no other Hungarian pastry chef had ever been able to achieve.

Baker of the year
Bea Kovács

Bea Kovács often sings for her breads, as she is a trained conductor who fell in love with baking. At her bakery named Búzalelke, wonderful breads are created this way – worth the travel to the village of Kisapáti, located in Veszprém county.

Miklós Terei is the cinematographer, director and editor of the ingenious short film about the Michelin star restaurant Stand, and a constant accompanist of the Hungarian team of the Bocuse d’Or competitions and all sorts of gastronomic events.

Gastro-showman of the year
Márk Lakatos

In the past few years, several Hungarian celebrities have cut into the hospitality industry, with little  long term success. The most famous Hungarian stylist, Márk Lakatos, on the other hand, cleverly took advantage of his popularity as a fashionista and TV presenter, and the success of his tiny street food stand ‘Lakatos Műhely’ located at Budapest’s Downtown Market at Hold utca, is unbroken. With his striking style, Mark is a lovable figure who writes and speaks enthusiastically and authentically about gastronomy. He has also written a popular cookbook.

Sándor Mérész is the winemaker of Etyeki Kúria. He says he became a winemaker only by accident, although those who have tasted Etyeki Kúria wines in the last decade, state: there is no such thing as coincidence!

Sommelier of the year
Victoria Evans

Victoria Evans is currently the ‘shooting star’ on the Hungarian gastronomy scene as a sommelier.  Following her positions at Pierrot Restaurant and the Michelin star restaurant Costes, as of April 2017, she is Executive Head Sommelier of the Marvin Gauci Group of Restaurants, responsible for the wine and beverage list of all six restaurants in Malta and Budapest. This year she graduated from the Wine & Spirit Education Trust (WSET), completing Level 4. Shortly after she received our sommelier award founded this year, she finished first at the 2020 Hungarian Sommelier Championship.

Gastro entrepreneur of the year 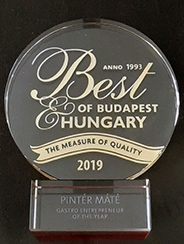 Budapest owes many restaurants and eateries to Máté Pintér: he is the strategic manager and the person ‘behind the scenes’ of the Barside cocktail bar, Cupákos, Raqpart and most recently, Felix.

Special recognition for excellence in hospitality 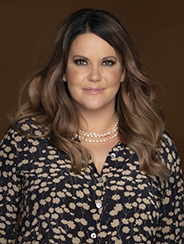 Ágnes Herczeg is officially one of the most promising experts in the wine industry, ever since she won the WSET and IWSC ‘Future 50’ international awards in 2019. Holding a WSET Diploma, and being a WSET Certified Educator, and a Fine and Rare Wine Specialist, she is running her wine consultant company since 2007, currently working as a wine consultant and advisor for Lidl Hungary, and several Hungarian and foreign wineries. She is the head of the wine tourism advisor postgraduate program and WSET program of the Budapest Metropolitan University and a member of the university’s advisory board. She is the European Brand Ambassador of Women of the Vine and Spirits organization.