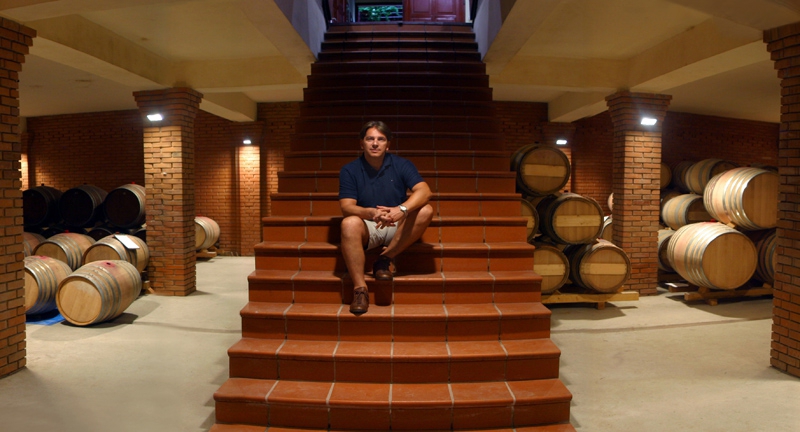 Malatinszky Kúria Organic Wine Estate in Villány is unique in many ways. It is not only a successful business and winery offering top-wines, but also a place of experience and experiment.

Owner and wine-grower of the Malatinszky Kúria Villányi Borászat, Csaba Malatinszky is at the forefront of promoting the exceptional wine attributes of Villány-Siklós, Hungary’s southernmost wine region. He established his winery in 1997 and since then his status as a successful winemaker and businessman has grown remarkably. He was Hungary’s first sommelier before turning to winemaking and now his passion for great wine to match great food is again balanced with the opening of his new facility, a bistro named Borterasz, in the middle of Villány. “We have created a uniquely stylish epicurean experience so visitors can explore the Malatinszky wine world, complimented by delicious, locally sourced, seasonal food,” notes the winemaker.
Naturally
Malatinszky says he has purposely steered away from the typical fine dining experience. He’d rather let the earth talk and express itself through the wine and food. He is excited at the variety of excellent local ingredients available in the region, many of them grown in his own organic garden onsite. “The climate here is mainly continental, but with some Mediterranean influences from the south, and the long sunshine hours make it ideal to grow a huge range of fruits and vegetables,” Malatinszky notes, adding that he currently cultivates 14 different tomatoes, which is the best selection, chosen from 30 different varieties he experimented with years ago. “Also, I managed to harvest beautiful figs. Carefully harvested and processed, these ingredients have become key components in our seasonal menus. And, next year, I’d also like to introduce a range of home-made, jarred jams and sauces, to preserve the essence of summer.”
THINK WORLD CLASS. EAT LOCAL
Borterasz, according to Malatinszky, is on the best track to become a topend destination for locals and visitors alike looking for a chance to celebrate what the beautiful Villány region has to offer. And that is fresh local cuisine, perfectly paired with wine grown and made on site. In the tiny experimental kitchen, as Malatinszky, a devoted cook himself, refers to Borterasz, the focus is on creating uncomplicated and traditional flavors. He is a firm believer in balancing simplicity and complexity when approaching the plate, ensuring the ingredient and its origin are always well respected. “The menu is short and changes weekly, depending on what produce is in season,” he adds. The purpose designed building of Borterasz is comfortably modern and seats 20. “If the weather allows, another 20 guests can dine alfresco, under the shelter of hundred year old walnut trees.”
Fair Trade
Dedicated to environmentally friendly and sustainable agriculture, Malatinszky follows organic growing practices. In fact, this year he has gone entirely organic. “Rather than relying on herbicides or pesticides, we focus on enhancing soil fertility and fostering beneficial processes to minimize the need for intervention to control pests and diseases. Our wines are allowing nature to speak for itself, as do all other fruits and vegetables in my garden." Extending to a total 30 hectares, Malatinszky’s vineyard produced the first commercial crop of certified organic grapes last year. The winery’s comprehensive wine list showcases world class red wines, among them the hallmark of the winery, the unfiltered Cabernet Franc. Annually, 25-30% of the total production of 200,000 bottles goes in export (which number, within five years, should increase to 70%, according to Malatinszky), to Belgium, China, England, Japan, Switzerland and the U.S. Malatinszky is now in talks with Swedish partners as well. He also supplies wines to the royal family of Great Britain, and his reds also made the list of wines presented at gala dinners and conferences during Hungary’s EU presidency last year. Malatinszky wines are regularly honored in international competitions.

CSABA MALATINSZKY began as head sommelier at Budapest’s Gundel Restaurant and became the first internationally certified exponent of the profession in Hungary. He went on study tour to Bordeaux where he learned about viticulture, winemaking and the art of blending, spending time at some of the best Châteaux in Médoc such as Château Pichon- Longueville Baron, Château Lynch-Bages and Château Cos D’ Estournel. In 1993, he opened one of Budapest’s first specialist retail wine shops, La Boutique des Vins. Malatinszky’s wines are available at three levels. His entry level wines are the Le Sommelier range which consists of some superb Chardonnay and Merlot Rose, followed by Noblesse and finally his Kúria which is his top-end wine. His mastery over the techniques of winemaking is evident in his Cabernet Franc, a varietal that is hardly produced as a 100% varietal except in Chinon, Bourgeil and Saumur Champigny in the Loire Valley.