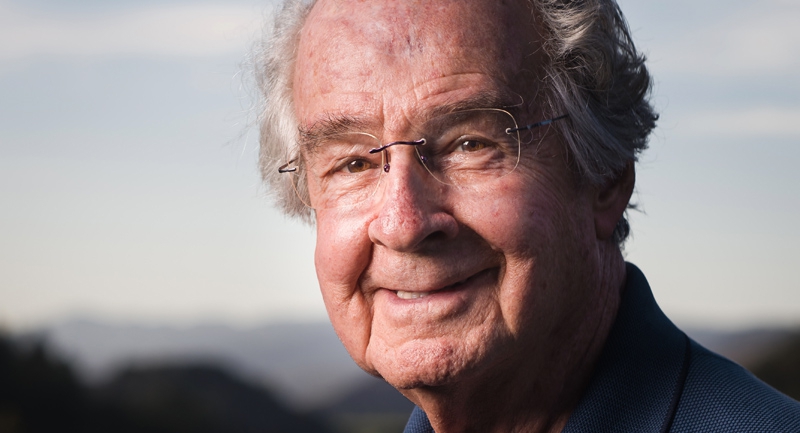 Warren Winiarski is the epitome of what Americans designate as a self-made man. He is known throughout the world as the legendary winemaker who was there at the right time and place.

Warren Winiarski went on to international prominence when his Cabernet Sauvignon won the famed Paris Tasting of 1976, over the Bordeaux icons. Astonishingly, the accolade came just one year after Winiarksi opened his winery, and he is seen today as the pioneerof Californian winemaking, the living legend, who has put California on the wine map of the world. Traces of the political scientist (his original calling) still remain, and Winiarski is more than just an illustrious viticulturalist. He is known by everyone as a suave, extremely convivial gentleman, the product of a bygone era, whose erudition about a world of things and the philosophical depths of his thoughts have enabled him to place wines and arts at an equal footing. Educated in Italy, Winiarski (who came from a Polish family with a surname that means ‘the winemaker’s son’) was a university lecturer in Chicago until 1964, when he set out for the Golden State to serve an apprenticeship in winemaking at a small winery in the Napa Valley. In 1966 he became the assistant wine maker of the new Robert Mondavi Winery. Afterward, he purchased a patch of land on the Silverado trail and gave birth to the winning wine in Paris in 1976. Winiarski has visited Budapest this summer to address an audience in the imposing ball room of Corinthia Hotel Budapest, packed with viticulturists and aficionados of wine, who were in pursuit of a truth more ultimate and perhaps more enduring than the trite Latin adage. Winiarski spoke to us at a simple bakery following the well-attended Vince 2011 wine conference.

You established Stag’s Leap Wine Cellars in 1970 and became famous overnight when your1973 Cabernet Sauvignon scored higher than Bordeaux’s entrants in the 1976 Steven Spurrier-staged blind tasting that came to be called the Judgement of Paris. In 2007, you confirmed what had previously been unimaginable and sold Stag Leap’s Wine Cellars in the Napa Valley. What was the raison d’etre for so daring a move?
WARREN WINIARSKI: The move may not have been so daring as you say. For quite a few years proceeding 2007, the family held many meetings leading up to the decision that it would be best to find an appropriate partner to carry forward the winery to which everyone contributed. That was the key moment when we decided to look to a transition of some sort which eventually led to the sale.

Your professional background is an open book in the world of viticulture. Less so is your
unique philosophy about wines and what they truly represent to you. In a 2002 interview, you famously stated that “the wines that seek the maximum are missing the subtleties”. Has this credo of yours changed over the past decade? If so, inwhat direction?
WARREN WINIARSKI: My belief in regard to excessively extracted red wines or very powerful whites remains the same. It is fundamental to my approach in wine in general. Not only do the subtleties go missing but such wines, because of their power, rapidly induce fatigue. Fatigue and beauty are not friends.

People are prone to talk about good and bad wines. Simply put, what makes a wine good? What adjectives would you use to describe the wines that influence you the most?
WARREN WINIARSKI: A good wine should be an agreeable freshening companion to food, a fine wine should involve that “faraway look” which says the mind is experiencing a pleasant mystery.

“Beauty is truth, truth beauty,” concludes John Keats in his famous poem on a Grecian urn. How would you apply this last but one line to your understanding of wines?
WARREN WINIARSKI: This thought-provoking line of poetry has its own mystery: Perhaps, it is related to wine in the saying “In Vino Veritas”.

Undoubtedly, Hungarian wines are world famous. So much that several literary pieces of
the Anglo-American tradition have made passing mentions of our wines. Clarissa, in Virginia Woolf’s Mrs Dalloway sends for a bottle of Imperial Tokay, implying, as it were, that the Dalloways had the privilege within their community to get their hands on the scarce liquid. To what extent do you think wine plays a role in determining one’s social standing or refinements?

WARREN WINIARSKI: It may be that rarity and precious quality of some wines make them accessible only to a few. Merit and access may also be a matter of chance. The Tokay, I believe was also a prized favourite of some Polish Kings.

Vince 2011 is the most prestigious wine event of the year. Is there a Hungarian wine that has impressed you through and through? Did any of them really tickle your taste buds during this trip of yours in Budapest?
WARREN WINIARSKI: Travelling to Hungary was certainly a treat for me. There were many outstanding wines which I tasted during the Vince 2011, a wine conference expertly put together. I was especially impressed with the progress made in matching specific terroirs and classic varieties. Two especially fine examples come to mind in this regard: The Vylyan Pinot Noir and the Cabernet Franc of the Malatinszky Winery, both of the famous Villany region, in the southern part of Hungary.

In your thought-provoking presentation at the event, you ventured into the field of architecture and music only to perform a strange loop and come back to wines. “Harmony” was the keyword you used. Might I know a bit more about it?
WARREN WINIARSKI: “Harmony” is that special character in wine, which brings the “faraway look” to one’s eyes described earlier. It is present in other things: architecture and music, for example, which I described in my talk. It is a “tense” resolution which we enjoy, of “different”, even “opposed” elements.