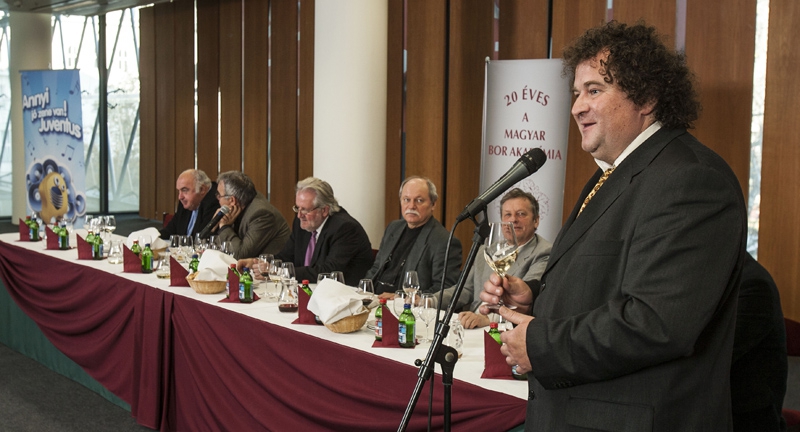 Áts Károly is Winemaker of the Year 2012

Áts Károly was named “Winemaker of the Year 2012” by the Hungarian Wine Academy. Áts hails from the Tokaj wine region, and is the 22nd winemaker to receive the award, Hungary's most prestigious. Congratulations!

Born in 1965 in Sárospatak, Károly Áts grew up surrounded by Hungary’s wine business. His father was a viticulturist, serving as vineyard district manager at Tokaji Kereskedőház Zrt. (known as Borkombinát, a large state-owned cooperative, during the Communist era). As soon as he could, the father proudly bought his son half a hectare (1.24 acres) of vineyard in Mád as a graduation gift. In August 1988, Áts Junior took a job as assistant at Tokaji Kereskedőház. In one year, he was promoted and served as cellar master from 1989 to 1994, working in Tokaj, Tarcal and Mád. Áts left Kereskedőház in 1994 to join Royal Tokaji as cellar master. In 2000, he became the chief winemaker at Royal Tokaji. Áts’s aim is to make Royal Tokaji wines world famous, as Tokaji wines were centuries ago. Making wine is a challenge each year, he says. What Áts loves about winemaking is the continuous challenge he must meet to keep Royal Tokaji’s crown as the premier producer in Tokaj and the impetus of the Tokaji Renaissance. He says the wine business affords him the opportunity to meet many people worldwide who share the same interests, and he’ll always appreciate how wine brings us closer together. He lives in Tarcal, a town southwest of Mád and not far from his hometown, with his wife and two children.
About the 'Winemaker of the Year' award:
The Winemaker of the Year award-giving  event is a yearly celebration held in Hungary since 1991, with the main goal of acknowledging the most outstanding performances over  the last period -plus a lifelong achievement award- in the fields of gastronomy and winemaking. The title is presented following a two-round voting process. In the first round, the Wine Academy shortens its list of nominees to five winemakers with the help of professionals from the industry. Then in the second round, it chooses a winner. The runners-up this year were Tamás Borbély (Badacsony), Tamás Dúzsi (Szekszárd), Éva Gálné Dignisz (Kiskunság) and Zoltán Heimann (also Szekszárd).