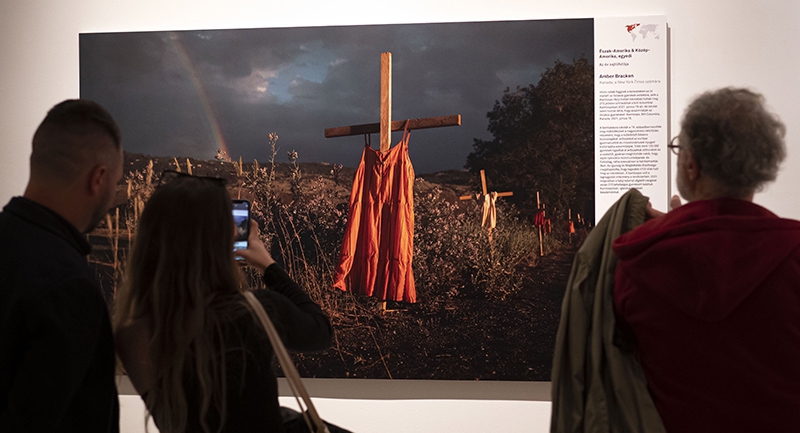 The World Press Photo 2022 exhibition was opened at the Hungarian National Museum this Thursday, presenting close to 140 photographs from around the world.

According to the organizers, the public can discover many carefully uncovered stories in the World Press Photo exhibition. The four global winners have each spent years working on their subject. Documenting the Amazonian dystopia for example, took more than 13 years. The Ukraine story illustrates how eight years of work have brought us to the to the current war, and the journey to the storming of the Washington Capitol.

“Those photojournalists who brought us these stories had to work in an increasingly hostile environment. sometimes risking their lives. In the wake of the new structure of World Press Photo subjects, images, perspectives and formats. The exhibition shows that the same thing is happening pretty much everywhere in the world: the climate crisis, the struggle for social justice, violence against women. We see young people everywhere from Argentina to Sudan standing up for their rights. Atrocities committed against indigenous peoples are coming to light. But it can also be seen that alongside despair, there is always hope, as people around the world try to take control and make a difference, change things if they need to,” they highlighted.

As World Press Photo is an independent, non-profit organization, founded in Amsterdam in 1955, which has since become a recognized platform for journalism worldwide, the Ambassador of the Kingdom of the Netherlands, Désirée Bonis was also present at the opening.

She stressed that the importance of press freedom cannot be overemphasized, especially in these troubled times: the Russian invasion of Ukraine is still taking place just a few hundred kilometers from Budapest, while economic difficulties and the climate crisis are also being tackled.

“Critical, independent investigative journalism is the lifeblood of any democracy," the ambassador pointed out, adding that the existence of press freedom is therefore a measure of whether a country is ready to join the EU.

The 2022 exhibition of the World Press Photo Competition is on show at the National Museum until October 30.