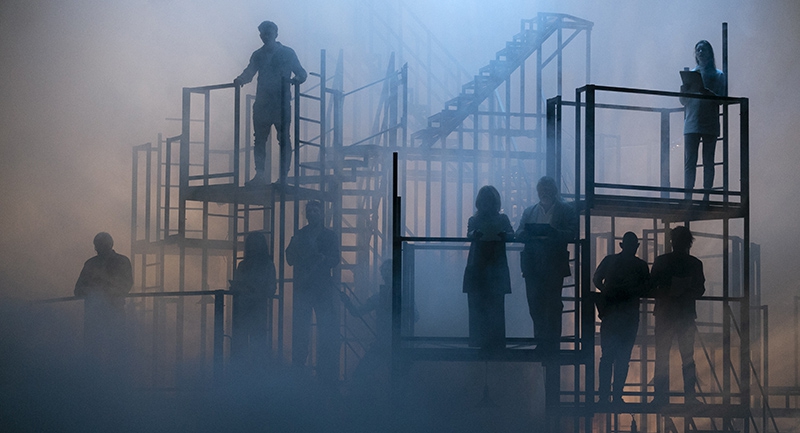 The Budapest theater Vígszínház [‘Comedy Theater’] held its season opening meeting on September 14. For the 2022/23 season, the theater is planning to present eight shows in three venues.

On October 8, Viktor Bodó will direct Kafka's ‘The Castle’, while on October 22, the Pesti Theater will premiere a contemporary English play, ‘Incognito’, directed by Artur Szőcs. In December, Shakespeare's ‘Measure for Measure’ will be staged by Péter Rudolf, while Pinocchio, directed by Tamás Keresztes and with music by Gábor Presser, will debut in February at the Vígszínház. The ‘Three Nights of One Love', directed by Attila Vidnyánszky, Jr. and ‘The Cat on the Hot Tin Roof’, directed by Péter Valló will be performed in the Pesti Theater. In November, Házi Színház [‘House Stage’] will stage the premieres of two contemporary Hungarian dramas, ‘The Travels of K’ and ‘The Surrogates’.

"I will not list the obvious difficulties we face. The biggest difficulty is that we don't even know exactly how big the problem is. We have to make compromises in order to play. But as long as a spectator comes, we play. We will keep our shows", emphasized Vígszínház director Péter Rudolf.

The set of the castle is a huge, elaborate scaffolding that is as opaque as the Kafka piece itself, a "madness in the good sense". According to the story, K, the surveyor, arrives on a dark, snowy winter's night, in the village overlooked by Count Westwest's castle. K has been ordered there to do surveying work, but no matter how hard he tries to get up to the castle, he fails to make contact with his employers, only with the locals, who are suspicious...

Nick Payne's Incognito will debut at the Pesti Theater on October 22. The "brain-like" play focuses on the theft of Albert Einstein's brain. The story of the production directed by Artur Szőcs is a great adventure not only for the audience but also for the actors, as the nearly 20 characters are played by only four actors.

On December 9, the Vígszínház will present ‘Measure for Measure’, Shakespeare's last, not at all light-hearted comedy, directed by Péter Rudolf, which focuses on a real political game, and, of course, on mad desires, cunning manipulations, some ridiculous buffoons, love or the illusion of it. This unusual comic adaptation of a work rarely performed in Hungary is intended to be a real group theater production, its world evoking both the past and the present, as the workings of power have changed very little since King James came to the throne.

The Pinocchio is one of the most popular, translated into most languages and perhaps the best-selling literary work, yet thanks to hundreds of adaptations, few people know the original story. The creative team of the February production has been working for months on a comic theater version of Pinocchio. They will create their own new musical version of the work, not based on previous adaptations, but going back to Carlo Collodi's original story.

The first Hungarian musical, ‘Three Nights of One Love’, was a groundbreaking work at the time of its premiere in Hungary in 1961. The director of the play put on stage at the Pesti Theater, Attila Vidnyánszky Jr. says "I was looking for a material that shows through the eyes of young people how to get through a period when the world is falling apart.”

The Vígszínház is determined to make the Házi Színház a workshop for contemporary Hungarian drama in the coming years. On November 5, the premiere of Attila Komán's dramatic poem K's Travels, directed by Klaudia Gardenö, will be shown. The protagonist of the strange story of the disappearance is K, played by Zsombor Kövesi, a 1,211-kilogram cocaine shipment, whose journey from South America through the Azores, via Budapest and Transylvania is followed. The script is based on real documents and stories, which also touch on the situation after the war in Ukraine. The sketch-style presentation with short images shows different aspects of surrogacy.