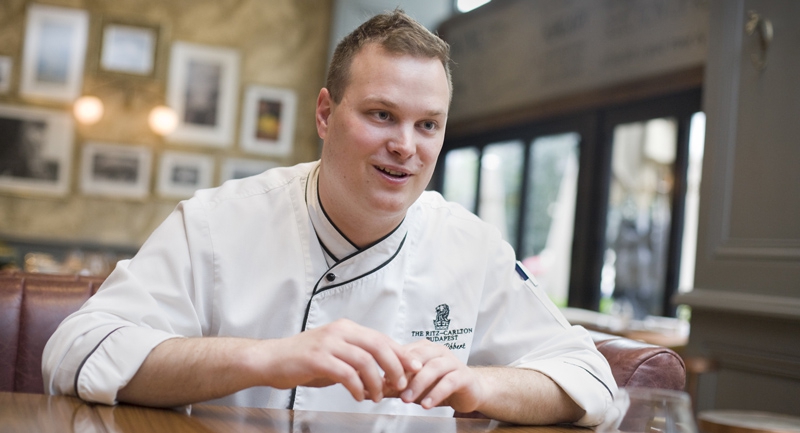 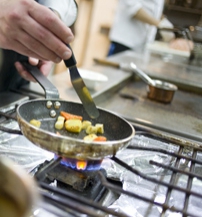 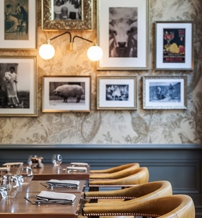 “Hungarian wine bar and grill serving world famous award winning wines and international comfort favorites from local ingredients with a real Budapest twist,” reads the official teaser of Deák Street Kitchen (or as many call it, DSK), summarizing the main features and characteristics of the restaurant that opened in spring 2016 at The Ritz-Carlton, Budapest. I had sat down with the restaurant’s Chef de Cuisine, Róbert Sugár to ask him about his first two years’ experiences, and about DSK’s summer menu introduced only a few days earlier. It was difficult though, to talk about anything summer-related, when outside there was the ugliest weather with pouring rain and less than 12 C degrees – a stark contrast to the beauty and warmth of the restaurant’s interior design. I admired the carefully laid wooden floors, smooth leather seating and warm lighting, when Róbert brought me a coffee and noted that none of these elements were present when he first entered the building for his job interview.

“Reconstruction was still under way. At that point, it was very challenging to imagine the final look of the place.” I learned from him that the interior was designed by Mark Bithrey & Roisin Reilly, from ’B3 Designers’ who mixed bold, masculine undertones of deep rich leather seating, walnut furniture and Hungarian point timber flooring with brighter details like the rose gold trim on the lighting and furnishings and the antiqued mirror paneling around the room, for a truly sophisticated look. Carefully selected and curated historical Hungarian artwork and imagery (photographs and prints with a hint of humor) adorn the walls while the open show kitchen adds drama and liveliness to the space. “One of the main successes of the restaurant’s design is its accessibility from the street, opening out onto its namesake, Deák Street, also referred to as Budapest’s ‘Fashion’ street. The designers were asked to create a welcoming restaurant with an independent feel,” the chef said.

With this vision, The Ritz-Carlton, Budapest moved away from the idea of offering ‘fine dining to hotel residents, exclusively’ because “it was pointless to focus on hotel residents with an in-house restaurant.” “DSK was always dreamed to be full of locals and tourists alike who feel comfortable here. I believe we managed to remain true to the original concept and opened a contemporary, modern grill bar and bistro that offers a menu that does not cost an arm and leg.” Róbert revealed that the hotel has an influx of locals at lunchtime but they still need to balance out the evenings’ 20 % vs. 80% ratio. “To target local Hungarians, last year we were present at Budapest’s biggest gastro and wine fests such as Rosalia, the Budapest Wine Festival (in the castle) and the Gourmet Fest. Our stands were very popular, people were curious and we have welcomed many of them back in the restaurant, soon after the fests. It does take time to build a strong community of returning guests, especially with the competition being so high in downtown Budapest.”

The chef told me that he and his team of eight who are responsible for the restaurant and the Club Lounge are very focused when creating the menu that appeals to all. “For example, when one looks at our menu, he understands straight away what will be on the plate. We don’t use fancy words that nobody even understands. As we are a very meat-and-wine focused restaurant, the essentials are simple, seasonal ingredients of the greatest quality, presented artistically and beautifully.” As for the ingredients, Róbert said he is on a mission to find reliable Hungarian farmers. The fact that prior to his current position, he worked in one of the best restaurants in the Hungarian countryside, Kistücsök in Balatonszemes has helped him to gain not only culinary knowledge but also allowed him to interact with suppliers themselves. He has found the best mangalitza in Somogy county, but for vegetables, he continues to struggle to find reliable Hungarian sources, in terms of consistency and volume. According to the chef, summer-season dishes at DSK are prepared with fresh, delicious and dominantly Hungarian ingredients.

For a cool treat, he suggested the chilled cucumber and yogurt soup with Osetra caviar and radish, and for a main course, either the succulent grilled Wagyu short rib with pea variations and sausage foam, or the crispy-yet-tender confit duck leg with caramelized cabbage pasta and roasted garlic jus. According to him, a few items on the menu are mandatory year round, such as the gulyás, which is a bestseller, even among Hungarians. Of course, DSK serves this iconic dish a little different from the traditional version. “Its core is the beef cheek, and the vegetables we add, give a tiny twist to the dish that comes with potato confit and caramelized celery.”
According to the chef, it is important to understand the palate of both Hungarians and foreigners, to figure out how far he can go when he wants to give a Hungarian dish a new look or taste, or, the other way round, how to create a Hungarian-inspired burger. “Little things such as adding fermented vegetables to a dish or changing the flavor and texture of only one of the ingredients, is the trick,” he added. Presentation of food at DSK is outstandingly gorgeous – I asked if Róbert was trained by István Pesti, who is considered, by many, to be the chef who creates and presents the most beautiful dishes in Hungary. Róbert smiled and said they had worked together for a year, indeed. Another fond memory was the moment he learned he got the job at The Ritz-Carlton, Budapest. “To be honest, I was in shock for days,” he laughs whole-heartedly. And ever since, he’s been carrying the famous Credo Card (that has guided the employees of The Ritz-Carlton since its founding and that lists principles such as “serve… even the unexpressed wishes” of guests) in his pocket, with pride.