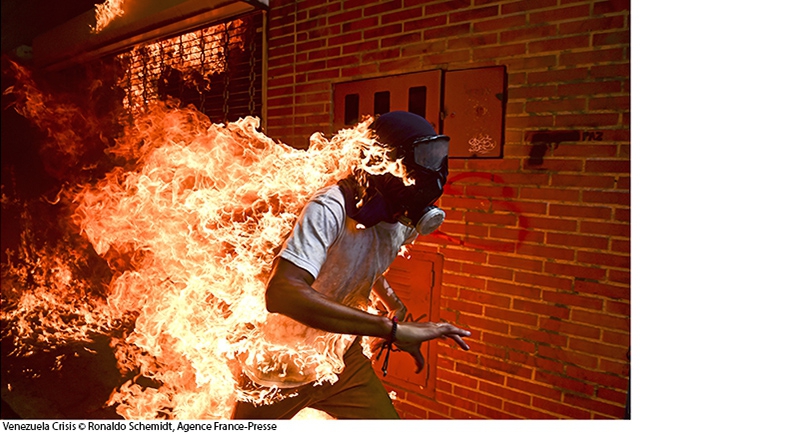 The world's most prestigious annual photo exhibition is in town until October 23, showcasing the biggest moments of last year.

Hailed as the Oscars of photojournalism, the World Press Photo exhibitions attract up to 4 million people each year worldwide in some 45 different countries. Now, in its 61st year, the World Press Photo exhibition is the most significant travelling exhibition dedicated entirely to photojournalism, profiling the globe's top press photographers and showcasing the world's most provocative and poignant press photos.

Every February, an international panel of judges selects the winning photographs from the entries. For the 2018 competition, 4,548 photographers submitted more than 73,000 images. From the 307 shortlisted photographs, 42 photographers were awarded 45 prizes across eight categories. Top honors this year went to Venezuelan photographer Ronaldo Schemidt, for his photo on José Víctor Salazar Balza as he caught fire amid violent clashes with riot police during a protest against President Nicolás Maduro, in Caracas, Venezuela. Judges praised the emotion captured in the photograph, which has also won Schemidt – a staff photographer for Agence France-Presse – first prize in the Spot News Single category. “President Maduro had announced plans to revise Venezuela’s democratic system by forming a constituent assembly to replace the opposition-led National Assembly, in effect consolidating legislative powers for himself. Opposition leaders called for mass protests to demand early presidential elections. Clashes between protesters and the Venezuelan national guard broke out on May 3, with protesters (many of whom wore hoods, masks or gas masks) lighting fires and hurling stones. Salazar was set alight when the gas tank of a motorbike exploded. He survived the incident with first- and second-degree burns,” Schemidt explains the moment he captured and the story behind the photo. “It has an instantaneous energy. The colors, the movement… and it’s very well composed – it has strength,” said 2018 World Press Photo Contest Jury Chair and Director of Photography at Geo France, Magdalena Herrera. Jury member and National Geographic Deputy Director of Photography Whitney C Johnson labelled the image “symbolic,” continuing: “The man has a mask on his face. He’s come to represent not just himself on fire, but this idea of Venezuela burning.”

Tamás Révész, Pulitzer Memorial Award winning Hungarian photographer has been the organizer of World Press Photo Exhibition in Budapest since he won a World Press Award himself in 1991. He says he is very proud to present the global exhibition in Hungary and see an increasing number of visitors visit the month-long show. “Last year’s edition drew the attention of more than 30,000 people who often left speechless, some with a tear in their eye,” he remembers. “This year’s collection also consists moving, sometimes very disturbing images - seeing them one after the other is a very powerful experience, even if you have followed the news through the year 2017.” Révész believes that the retrospective photo exhibition is a call for tolerance, empathy and humanity. “I hope it helps us to better understand the world around us.”

The exhibition this year is hosted by the Hungarian National Museum, where an accompanying exhibition is also on show titled ‘The most beautiful Hungarian nature photos from the past 25 years,’ by NaturArt. In 2011, the World Press Photo Foundation launched its Multimedia Contest to reward the best forms of visual journalism made by digital means. Renamed ‘Digital Storytelling’ in 2016, the contest is open to digital storytellers, visual journalists and producers, whose works can be seen on touchscreens and on a large screen – first time in Budapest, at the World Press Photo Exhibition.