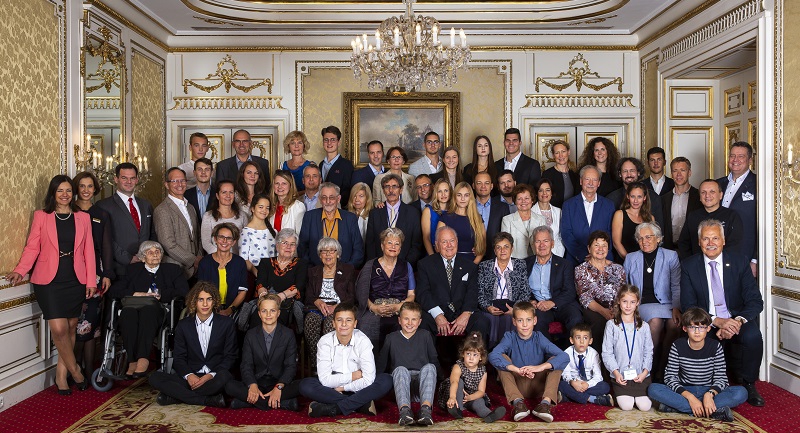 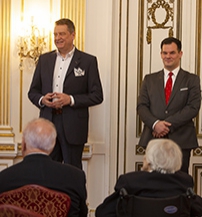 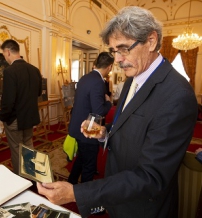 Close to 60 living Gundel descendants took part in a reunion in the family's former home, which turned 125 years old this year.

Gundel is one of our nation's most-famous brand name that not only stands for a restaurant but also the broader culinary heritage. The restaurant opened its doors 125 years ago in an elegant villa in City Park. A decade and a half later Károly Gundel took over the helm, and created Budapest's most modern center of hospitality. The Gundel triumph can be tied to his name and his work, and even his children worked hard for the restaurant's everyday successes. The guests were welcomed by Peter Knoll, managing director, and Norbert Polyák, deputy director. Barbara Angelus, marketing and communications director, said that celebrating tradition is especially important during this anniversary year, which is why the Gundel family was invited for this special gathering in the building, which gave home to some of them. This large family reunion brought back lots of memories, and gave us the opportunity to be a part of such touching moments when guests from different corners of the world could spend time together as if they were home again. The oldest living descendant, Gundel's 90-year-old grandchild, was thrilled to show the youngest relatives the family photos in the small exhibition in the upstairs ballroom. It was uplifting to see the older relatives walk through the former family residence above the restaurant, remembering where their family meals or their children's rooms were in what are now used as event spaces.

The Gundel heritage, past and present

The event was hosted by Gundel Brand Ambassador Kálmán Kozma, who has spent more than four decades here in an active role, nurturing and enhancing the restaurant's reputation. In his speech he emphasized that Károly Gundel bravely undertook the reformation of Hungarian cuisine, applied modern kitchen technologies with a brilliant sense, and gave legendary dishes to Hungarian hospitality. In a groundbreaking way, he guaranteed quality ingredients for the kitchen through his own gardens, local producers, and carefully chosen suppliers. In 1948, the following accolade was written about Gundel by the well-known publicist Joseph Wechsberg in the pages of The New Yorker: "There are still a few places on the Continent where people with enough money, especially American money, can get pretty good food.... Consequently, that formerly great epicurean institution, the European restaurateur who made an art of his profession, creating new dishes and inspired variations of old ones, is now almost extinct. One of the last practicing representatives of this art is Charles Gundel, a sixty-five-year-old Budapestian who has contribued more to the fame of Hungarian cooking than any other man and who is ranked by connoisseurs all over the world in a class with such restaurateurs as Escoffier and Voisin."

Gundel outlived two world wars, but it couldn't escape nationalization, and in 1949, it became part of the National Tourist Hotel and Restaurant Company, later becoming a member of HungarHotels. Before the regime change it was part of the Fórum Hotel, and in 1986, the first Gundel gathering was organized. After this the family reunited in 1992, when the Láng-Lauder-Kalla era began the restaurant's second legendary age. The talented chef Kálmán Kalla left the Hungarian Embassy in Washington, D.C. to return home and make Gundel world famous. Since 2009 Gundel belongs to the Danubius Hotels chain, which is run by CP Holdings with Gundel under Danubius Hotels management. Kálmán Kozma not only spoke of past successes but also present possibilities, because with the arrival of Zsolt Litauszki, the restaurant received a truly ambitious chef, who respects the past and upholds tradition while creating modern concepts. The creative work shows up in more than just the cooking as once again the restaurant has an herb garden and there are also house-made jams. Seasonality is also important, as guests can trace the seasons through the ever-changing menu offerings. Zsolt Litauszki, like Károly Gundel, is very consistent in the selection of producers and purposefully buys meat, vegetables, and even goose liver from small but reliable high-quality suppliers. Goose liver is a true Gundel classic, and it's accompanied by seasonal items on the plate. Zsolt bravely uses those ingredients which were popular between the two wars such as frog's legs. During lunch on Sparkling Sunday, fine dining is replaced by a more relaxed atmosphere, with dishes such as broth, catfish lecso, and fried mangalitsa loin. Of course, it's worth mentioning the symbolic accessories that made Gundel Gundel, for example the elephant-shaped butter, the monogrammed silverware, and the Zsolnay porcelain. In order to create the perfect experience, every little detail counts, and Zsolt knows exactly what Károly Gundel's words mean in a radio interview from 1940 that we played during the afternoon. "When a guest sits down at a restaurant and starts to sort through the menu, he doesn't even realize how much work and trouble goes into the food that will be put in front of him ... to give him the pure little joys of life that you can expect at a white table.”

The family was touched to hear Károly Gundel's voice and wise guidance. His words are just as relevant today as they were 80 years ago. We wanted to celebrate these amazing moments in a special way with elegant snacks in the ballroom, where the classic Gundel goose liver and Gundel crepe were served. Guests were also able to taste the Litauszki-style dishes of mangalitsa cheek with celeriac puree, catfish paprikash with cottage cheese gnocchi, and fig and salted caramel mousse. During the gathering many stories were revealed about the family's life and gastronomic ties, about the name's obligations, and whether they have a Gundel cookbook at home. It was interesting to see how their great-grandfather's culinary heritage has branched out, as the name Gundel is not only held by the restaurant, but has lasted in many other ways. First of all we can mention the famous crepe, next the Károly Gundel Catering and Tourism Vocational School, the Károly Gundel Hall at Budapest's University of Economics, the Károly Gundel International Youth Gastronomic competition, the Károly Gundel prize, and Károly Gundel Way are all named after the restaurant's founder. For someone who has never cooked, but who was a supreme taster, Károly Gundel understood the language of the kitchen and proved to be the best at motivating chefs. Let's not forget that in 2014, the Hungaricum Committee classified the restaurant as a Hungaricum under the name of Károly Gundel culinary heritage and Gundel Restaurant.

The 125th anniversary was truly a joy to celebrate in a family circle, and this event gave the current culinary team inspiration to preserve tradition in an innovative, creative way.