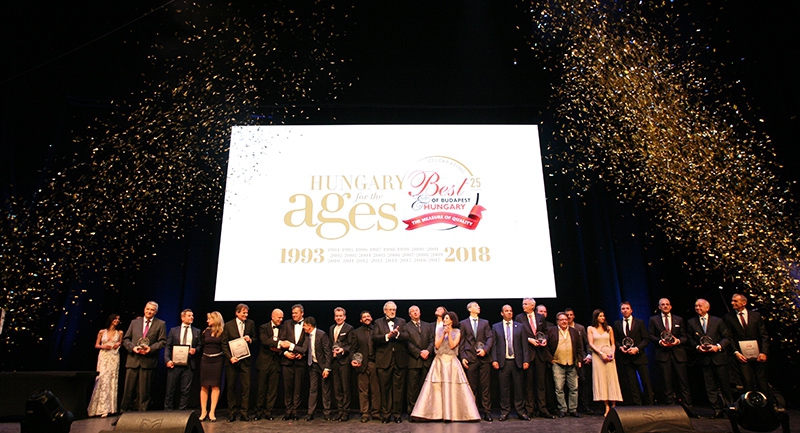 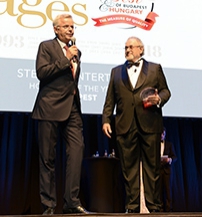 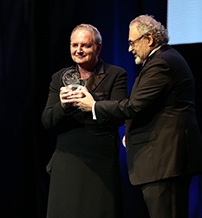 The Best of Budapest & Hungary special award winners of 2018

Zoltán Fehér is a creator of modern gastronomy in Hungary: someone who is able to continuously renew, who experiments non-stop and never runs out of new ideas. His restaurant, Cyrano serves as a starting point for many Hungarian master chefs. Zoltán’s guests experience a unique, captivating atmosphere, special and delicious dishes, in the 25-year-old Cyrano - no wonder they become regulars.

Gastro-entrepreneur of the year: Attila Hegyi

Attila is a pioneer in renewing casual catering services in Hungary. The symbolic figure of event organization changed the world of chips and cold dishes. Through innovation and resourcefulness, he has achieved success with today's well-established Albatros Party Service. In search of new challenges - or, by his own admission, driven by his professional vanity - he opened his fine dining restaurant TAMA.

It is uncommon for a couple to live in great harmony for such a long time, especially when they are involved in the same business. The couple’s restaurant Baraka – their ‘baby’ – has been a fine dining, foodie destination for French-Asian cuisine lovers since 2001. The owners’ presence in the business can be felt and touched, literally: Leora visualized the chic interior design, while the marvelous breads are often baked by David.

Restaurateur of the year in Budapest – classic category: Lajos Bíró

Located in the picturesque wine region Mád, Károly’s fine dining restaurant Gusteau Kulináris Élményműhely is recognized nationwide. The restaurant’s name translates to Gusteau Culinary Art Workshop, and indeed, it is art that’s being created in this restaurant. Károly, who is also one of the owners of St Tamás Wine Estate and Cellar, makes sure that both wine connoisseurs and food lovers find the wine list and the food impeccable, the service flawless and the atmosphere incomparable.

Chef of the year: Marvin Gauci

Quality, elegance and high-end service compliment an exciting, innovative menu at the Maltese star-chef Marvin Gauci’s Caviar & Bull restaurant, that opened in Budapest last year and has already become a hot spot for foodies. He fell in love with the hospitality industry at the age 13, and began to work as an assistant in a hotel while attending school in Malta. He worked in Ireland for a while, but his heart eventually took him home, to Malta. His first restaurant, Tarragon, opened in 2007, followed by Caviar & Bull, Buddhamann and Dinner in The Sky in 2016.

Patissier of the year: István Mázás

Inevitable and distinctive in the world of sweets, István Mázás is the Pastry chef of The Ritz-Carlton, Budapest, who creates wonderful masterpieces, including the heavenly and oh-so popular Royal Chocolate. Anyone who has once tasted his pastries and desserts will surely remember them forever. We can also thank István (nicknamed ‘Mázi’) for the first macarons in Hungary.

Baker of the year: Mihály Juhász

Originally a lawyer, Mihály Juhász didn’t mean to become a full-time master of bread at first: he worked in both professions, baking bread at midnight, in search for the perfect recipe. He only left the legal profession behind and changed his suit to an apron, when he knew he’d found that recipe – and since then, he is typically found covered in flour at his bakery.

Mr. Czini – as he is often called – is a truly original character, whose willingness to feed people well (most recently with heavenly smoky BBQ) is just as strong as his ability to entertain. He can be found at the best gastro festivals and touring the countryside with his ‘Gastro Hack’ gastronomy program series, collaborating with the best winemakers and chefs.

Founding member of the Mád Circle, winemaker István Szepsy is often called Mr. Tokaj. He is known by everyone as a genuine, modest, utterly gifted person who is devoted to his beloved Tokaj, where his family has cultivated wine since the 16th century. With those blessed enough to have the opportunity to meet him, he shares the philosophical depths of his thoughts.

Hotelier of the year in Budapest: Stephan Interthal

General Manager Stephan Interthal set a great example of how to survive and excel in the hotel business in Budapest, even during extensive renovation projects - which he has conducted more than once during his double reign at the Kempinski Hotel Corvinus. He says he is a “passionate guy” who knew, as early as the age of 16, that he would one day become a hotel director. Today he hopes he will be, in the future, remembered as “a good leader who challenged but also respected his people.”

Sensual, sophisticated taste and a commitment to the highest quality convene in Krisztián Eppel, who is in charge at Villa Vitae, a new and utterly unique Mediterranean-style boutique hotel in Balatonfüred, where you can relax with a glass of wine while marveling at the beautiful landscape of Lake Balaton and the nearby vineyards.

This is a special award for a special person. In 2014 a new era started at the Marriott Hotel in Budapest when Rick Enders arrived, as the new managing director, and immediately saw work that needed to be done – which he did in a ‘gezelling’ (a Dutch word roughly meaning a warm, cosy, homely feeling) way, true to his Dutch nationality. Rick is not just and expert in the field but a loyal father and a friend. He will soon be starting a new chapter in his life as he leaves Budapest to take over the Marriott Marquis in Doha.