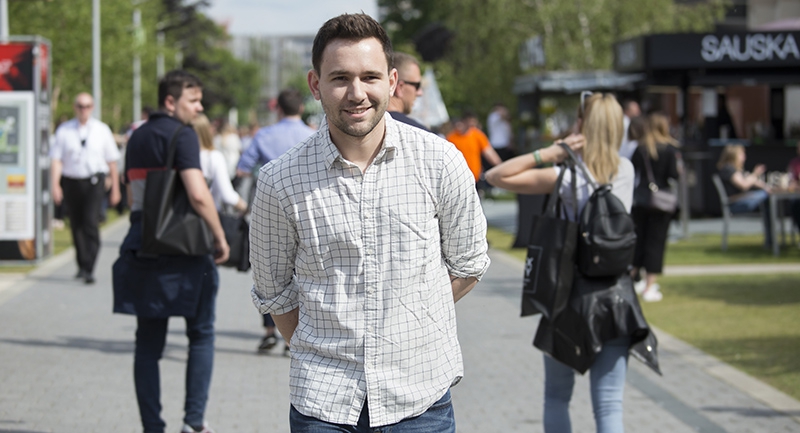 The ambassador of Hungarian cuisine - an interview with Jeremy Salamon

On May 19, American chef Jeremy Salamon took the gastro stage of the Gourmet Festival in Budapest and won the hearts of the audience by introducing his own take on lángos, a popular Hungarian street food classic. A few months before, on the invitation of ReConnect Hungary, he presented a dinner demo at the Hungarian Library in New York, dazzling guests by demonstrating a few of his signature Hungarian dishes. Best of Budapest & Hungary was eager to find out where his passion for Hungarian gastronomy comes from.

Only 25, Jeremy Salamon is often referred to as a culinary whiz kid who, at the age of 9, told his mother he wanted to become a chef, and stuck to his plan. Upon turning 13, he started his own cooking blog to connect with other like-minded teens. “I did start early, which gave me a certain advantage, but I’ve never aimed for the Youngest Chef title, or anything like that,” notes Jeremy, who was born and raised in South Florida, and soon moved to New York to attend the Culinary Institute of America. As you might have guessed already, Jeremy does have Hungarian roots. “My grandparents were born in Hungary, and somehow managed to stay alive in the Budapest ghetto during WWII. They chose to leave Hungary in 1956 (following the Hungarian Revolution), and fled to the U.S. through Vienna, finally landing in New York City, to start a new life, operating a drycleaners,” Jeremy reveals, adding that at the time, a huge Hungarian community lived on the Upper East Side (adjacent to Central Park, between the 73rd and 85th Streets), forming ‘Little Hungary’, with many Hungarian restaurants and shops. “These don’t exist anymore, and the Hungarian legacy is reduced to a confectionary and one tiny, 10-seat place called Andre’s where one can find traditional gulyás,” Jeremy continues. He says he was lucky enough to grow up tasting his Ági grandmother’s home cooking. “In fact, she learned to cook Italian and American dishes too, and our Sunday brunches often turned into multi-cultural, international feasts. But having palacsinta (a popular Hungarian dessert, which instead of the American pancake is similar to the French crepes: it is thin, silky, and rolled into logs with jam or cottage cheese cream inside) on the repertoire was a must,” Jeremy recalls. Despite their strong relationship, Jeremy says he rarely spent time in Ági’s kitchen. “Being a very proud, stubborn woman, she has never accepted help in the kitchen. Up to a point I wasn’t interested in my Hungarian heritage, but as I turned older, I started to beg her for recipes and stories alike, but then I realized that it wasn’t easy for her to remember her painful past.”

Later, while in college, Jeremy decided to cook a Hungarian meal for friends. Not possessing his grandmother’s entire collection of recipes, he stopped by a bookstore and purchased the only Hungarian cookbook they had: The Cuisine of Hungary by George Lang (the late Hungarian restaurateur, who owned New York’s iconic Café des Artistes). “That book was incredibly eye-opening. It became my Bible, and I became a Lang-freak,” Jeremy admits. Meanwhile, he started working in different restaurants in New York City, and, in 2015, one job took him to the East Village, namely to The Eddy, which, at the time, was famed for its international cuisine, something Jeremy did appreciate and liked, however, as he put it, “Something was missing.” In 2017, he left the restaurant behind and bought a ticket to Hungary. “I wanted to visit my relatives in Eger, and to gather as many ideas on Hungarian food and ingredients as I could. When I returned to NY City, I kicked off FOND, a series of pop-up dinners which were to demonstrate what I learned on my Hungarian trip: that Hungarian dishes don’t have to be overwhelmingly hearty, meat-focused and sauce-heavy.” His new, modern interpretations of his grandmother’s cuisine were so successful that The Eddy’s Canadian owner, Jason Soloway, soon asked Jeremy to return as executive chef, giving him a platform to showcase his love of Hungarian cuisine. “I must point out though, that The Eddy is not a Hungarian restaurant. Normally, the menu is a synthesis of New American with a few Hungarian touches, I would say,” Jeremy notes, adding, “within a year and a half, I am to open a little restaurant that focuses solely on Jewish-Hungarian food.” In the meantime, he hosts Hungarian dinners, such as the one he calls a ‘milestone’ in his career: a dinner commemorating George Lang. Held on June 5, 2018, The Eddy welcomed the entire circle of Lang’s friends and family, among them Jenifer Harvey Lang, Lang’s widow. “To me, they were like the Royal Family,” Jeremy says enthusiastically. “My inspiration for the menu that night came from Lang’s obituary in the New York Times, that mentioned an interview Lang gave to a Nina Lalli at Village Voice, on what his last meal would be: fisherman’s soup, stuffed goose neck, sour cherry soup, layered cabbage, stuffed peppers, plum dumplings, pancakes with apple meringue, and whipped-cream strudel. I did make a few modifications, for instance I changed the traditional green peppers to poblanos for the stuffed peppers. I also served my signature lángos, made with potato, yeast and milk, deep-fried once the gluten developed, topped with pecorino and finished with wildflower honey.” Jeremy says he can’t stand to see Hungarian cuisine becoming extinct. “Over a million people have Hungarian roots in the U.S. I’m sure Hungarian cuisine has much potential here. I’d love to see it revived, first in New York, as an homage to Little Hungary. I guess my mission is to spark some interest in it, by making it approachable and more attractive, with a few updates for a new generation.”