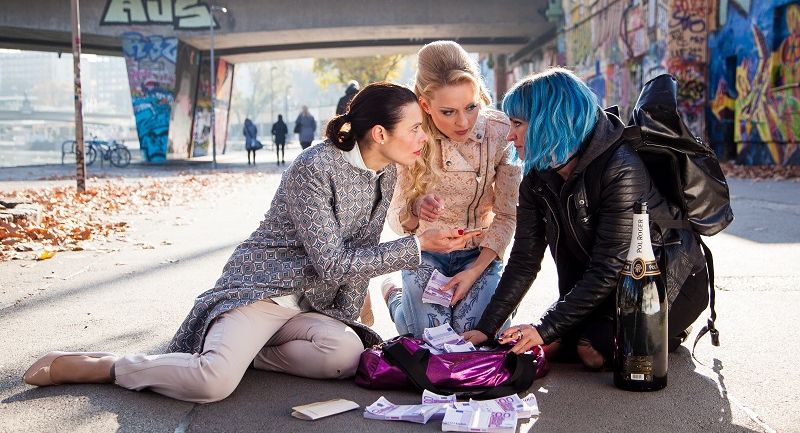 SZEMREVALÓ/EYEFUL Festival is back for the eighth time, sponsored jointly by the Embassy of Switzerland, the Austrian Cultural Forum, and the Goethe Institute. The fest brings the best of new films from German-speaking lands, including a number of prizewinners, to Budapest’s Művész Cinema, closing on October 6.

Elena Tikhonova’s Kaviar features a crazy oligarch who is to build a lavish Florence-style palace on a central bridge in the heart of Vienna. His interpreter Nadia together with her best friend and her nanny have a sabotage plan just as crazy. Who will succeed in this extremely funny culture-clash-gangster-comedy? Find out on September 27 at 8.30pm and on October 2 at 6pm.

The Ground Beneath my Feet (Talajt vesztve) is about Lola, who controls her personal life with the same ruthless efficiency she uses to optimize profits in her job as a business consultant. But when a tragic event forces the past back into her life, Lola's grip on reality seems to slip away. The audience can watch this dark drama on September 28 at 6.30pm and on October 2 at 6pm.

On September 29 at 8.30 Austrian director Markus Schleinzer’s Angelo will be screened. The movie is based on a true story: the story of Angelo Soliman. In the early 18th century an African slave boy is chosen by a European Comtesse to be baptized and educated. Reaching adulthood, Angelo achieves prominence and becomes the Viennese court mascot until he decides to secretly marry a white woman. The film has won 3 prizes this year at the Austrian Film Award.

In Bicska Maxi, against many odds, Bertolt Brecht's "The Threepenny Opera" became a phenomenal success. The film industry picks up the scent and seeks to make the master direct a film version of his "play with music". Brecht though refuses to play by their rules. While the studio wants to censor the "filth" and tuck at the heart strings to cash in on the success, the author wants to make nothing less than a completely new kind of film. A socialist critique on capitalism, staged as a conflict between Mack the Knife, a London gangster, and Peachum, the head of the beggars' mafia. And Brecht does not bow down; he takes the producers to court in order to prove that the moneyed interests are prevailing over his right as an author - and the right of the audience. Provocative, outrageously colorful and merging fact with the fictional and the visionary, Brecht's "true" Threepennyfilm comes to life before the author's eyes. A film that was never made. An artist who challenges the industry and audience alike. A poet directing reality. That has never happened before. This outstanding piece of art will be screened on October 1 at 8pm and on October 6 at 8.30pm.

Finally, The Tobacconist (Trafikos) is based on the international bestseller by Robert Seethaler. Nikolaus Leytner’s movie is a tender, heart-breaking story about one young man and his friendship with Sigmund Freud during the Nazi occupation of Vienna. Sigmund Freud is played by Bruno Ganz. It was one of his last roles. There will be two screenings with English subtitles of this magnificent drama, one on October 4 at 7pm and one on October 6 at 8pm.