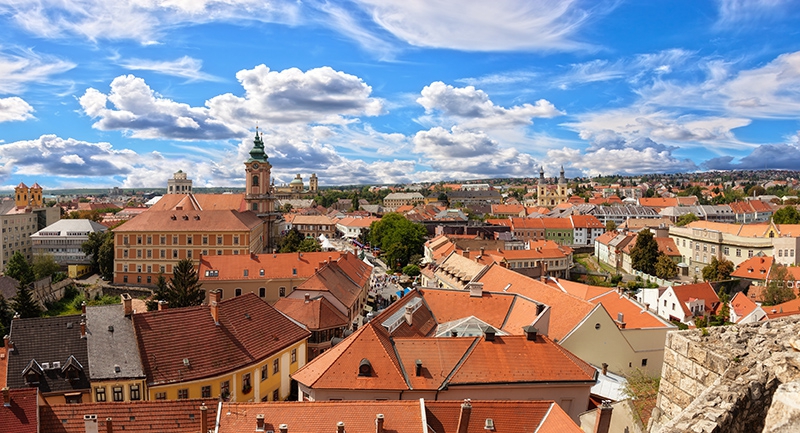 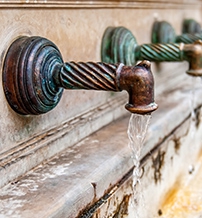 Often called ‘the Baroque jewel on the Hungarian crown,’ Eger is the third most visited town in Hungary thanks to its pleasant location, imposing architectural treasures, thermal baths and viticulture.

Up to one million tourists flock to this Northern Hungarian town annually. Hungarians especially love Eger and cherish its fascinating history, especially one specific battle, fought against the Turks. As the story goes, working their way up from the Balkan Peninsula, some 80,000 Turks arrived at Eger on September 11, 1552. 2,000 Eger residents including women and children, fighting from within the castle, held the line against the advancing invaders. Some say that when their spirits lagged, the innovative captain of the castle, István Dobó broke out the reserves of red wine in the castle cellars to fortify his men, and the Turks, seeing beards and armor stained red, became convinced that the Hungarians were drinking bull's blood for strength, and broke off their attack after a 38-day siege. (Sadly, they returned in 1599 and, this time, succeeded in conquering the castle.) The remarkable victory is written with golden letters in Hungarian history books, as well as in Hungarian author Géza Gárdonyi’s classic novel ‘Egri Csillagok.' (The title’s literal translation is ‘Stars of Eger,’ but it was published in English as ‘Eclipse of the Crescent Moon.’) Hungarian children literally grow up on this book, and Gárdonyi is buried within the castle that is the focus of patriotic field trips for students throughout the country. The castle grounds today feature several small museums, including a history museum, picture gallery, dungeon and underground casements.

The 18th century was a period of development and prosperity in the history of Eger. In 1814, the city became an archiepiscopal see; the many churches subsequently built here have earned it the name “Rome of Hungary.” The Baroque townscape, which has been characteristic since then, was formed by the erudite Catholic bishops of Eger, out of special respect for Ferenc Barkóczy and Károly Eszterházy, living here in the 18th century. Their high ideas were realized by excellent designers and architects of Austrian, German and Italian origin, together with skillful Eger building masters. Today, the town center alone boasts 175 protected buildings and monuments. The most spectacular ones among the Baroque buildings are the Minorite Church, the Small Priovost's palace, the Great Priovost's palace (the County Library), the County Hall with Henrik Fasola's two wrought-iron gates and the Serbian Church. The late Baroque teacher-training Lyceum, today the College of Eger, was founded by Bishop Eszterházy. This institution’s libraries, decorated with ornamental carvings and wonderful ceiling-frescos, feature more than 130,000 volumes, including the first book printed in Hungary from 1473, and a letter written by Mozart. The tower houses the country’s first astronomical museum, the Specula Observatory with a Camera Obscura, which projects the real image of the town on a white board in the darkened room.
The heart of Eger is Dobó Square. Nr 5 is home to a “Palóc” Folk Art Exhibition that gives an overall view of the ethnography of the area showcasing folk-weavings, embroideries, furrier’s works, ceramics and festive wedding clothes. The Basilica at Eszterházy Square is the only Neo-classic building in the city and the second biggest church in the country.

With its 40-meter height and 100 narrow spiral stairs twisting to the top, the Minaret, a remarkable reminder of the Turkish occupation, is also a favored tourist attraction, offering a breathtaking view of the town. Another momentum of  Turkish times is the Turkish Bath, the only bath of the kind in Hungary outside Budapest, built between 1610 and 1617 by Arnaut pasha. Today, the original, golden-vault Turkish pool is part of a grand bath complex, which after a full-scale reconstruction, re-opened in 2009, complemented with five pools, 4 types of saunas, steam baths and a traditional Turkish steam bath.

Eger, the seat of Heves County, is surrounded by gently sloping hills of volcanic origin, including the Mátra Mountains. Nature has endowed this region with ideal conditions to produce wine. The intricate network of underground cellars ferments and preserves the world famous wines of the area, including Egri Bikavér (Bull’s Blood) and Egri Leányka. When  Turkish invaders first occupied Eger, residents moved into the next valley, living in caves dug into the hillside. Eventually they moved back to town, and the caves became wine cellars. There are more than 300 such caves in the valley to the southwest of Eger, several of which are open for visitors, serving food and wine. These rows of cellars form the so-called Szépasszonyvölgy. It's a fun scene, in walking distance from the city, with picnic tables and tipsy tourists. The oldest wine cellars are more than 400 years old, but new cellars are still being hollowed out. In September, the grape harvest is celebrated here with a grand festival.

Egerszalók is a small village in the northern part of the country, in the Heves region, picturesquely spread between the mountain ranges of Mátra and Bükk in the valley of the Laskó stream. The historic settlement's most prominent sight is a hot spring, the thermal water of which is used in a spa, the Salt Hill Thermal Spa that welcomes guests with 1,900-sqm water surface. The village church is a well-known pilgrimage spot, built according to the plans of the renowned Italian architect, Giovanni Battista Carlone. 31 kilometers from Eger lies Szilvásvárad, on the western side of the Bükk Hills. This is so much like a storybook land with its castles, churches and Europe’s most beautiful stud farm: the famous Lipizzaner horses can be seen grazing in the open fields. The village is an international holiday resort since 1971, but it became really well known during the 7th Carriage-driving World Championship in 1984. The Lipizzaner Equestrian festival is organized here every summer, with carriage-driving races accompanied with spectacular musical and cultural events. The Szalajka Valley is one the most stunning mountain valleys in the Bükk Hills. The countryside is simply overwhelmingly beautiful, featuring the fast-running Szalajka Stream, the main gem of the valley. The water of the Szalajka Stream was dammed at several places on its way down the 4-kilometer-long valley. Trout is farmed in these artificial lakes. In summer, a narrow gauge train takes tourists the length of the valley. The Veil-waterfall in Bükk National Park is also a beautiful natural formation. Other attractions include the Istállóskő Cave where prehistoric findings of cavemen were discovered, the Open-air Forestry Museum that evokes the industrial life of the area and the nearby historical castle ruins of Éleskővár and Gerennavár.