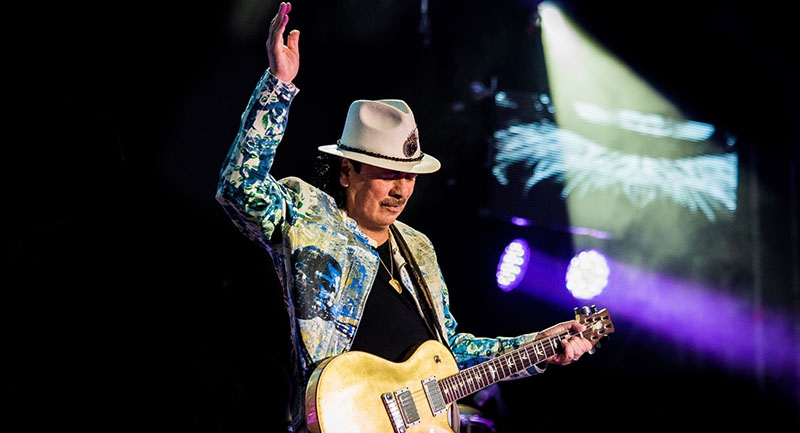 Santana concert in Budapest on March 19

Iconic guitarist Carlos Santana will be touring the world this spring, stopping at the Budapest Arena on March 19. The Miraculous 2020 World Tour Datesis celebrates the 20th anniversary of Supernatural and the 50th anniversary of Abraxas.

Carlos Humberto Santana de Barragan came from the humblest of backgrounds.  He was born 1947, in Autlan de Navarro, Jalisco, Mexico (where a street and public square now bear his name).  His father, a virtuoso mariachi violinist, instilled a musical spirit in his son who began playing violin at age five.  Later, when the family moved north to Tijuana, Carlos took up the guitar and began to absorb his first influences.  Listening to the powerful American radio stations whose signals reached into Mexico, he fell under the spell of John Lee Hooker, T. Bone Walker, and B.B. King, a trinity of guitar heroes whose styles blurred the lines of blues and jazz. The Santana Blues Band was formed in 1966, and its heady concoction of West Coast soul, Latin percussion, groovy organ, and Carlos’ stratospheric lead guitar was an immediate sensation.  By 1967, they were known simply as Santana. Their first album, Santana was released in 1969, and met with a warm response. The debut’s success was eclipsed at the end of 1970, when “Oye Como Va” and “Black Magic Woman” sent Abraxas to Nr. 1 for 6 weeks; the Grammy Hall Of Fame album has sold more than 5 million copies to date in the U.S. alone.

The arc of Santana’s performing and recording career is complemented by a lifelong devotion to social activism and humanitarian causes.  The Milagro Foundation was launched in 1998, the culmination of decades of support for countless charities and non-profit agencies the world over.  With more than USD 4 million in grants to date, Milagro supports organizations promoting the welfare of underserved children in the areas of health, education, and the arts. After more than 40 years on the world stage, Carlos Santana is at the pinnacle of his career, more vital and relevant than ever before.  His passionate “old school” virtuosity and “new school” cool attract the hippest artists to every new recording project that he and Clive Davis initiate. At the essence is a signature sound that is unique and instantly identifiable.  With his lifetime of achievement and dedication to music, every move that Santana makes is a multi-cultural event – the soundtrack for the world. Santana has sold more than 90 million records and reached over 100 million fans in concerts worldwide. To date, Santana has won ten Grammy Awards. In 1998, the group was ushered into the Rock and Roll Hall of Fame.