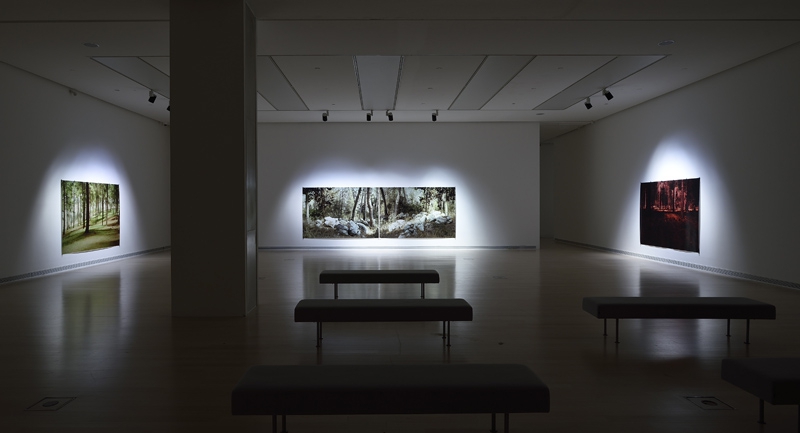 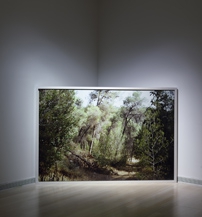 The exhibition, hosted by Budapest’s Ludwig Museum of Contemporary Art (LUMU) until April 1, presents Rafael Yossef Herman’s recent works: a large-scale photographic installation about spotlighting nature at night. All photographs were taken after midnight, under God’s great sky, with an analogue cameras - no additional lights, no digital manipulation or tricks used to develop the film. Curiously enough, Herman’s representation of the nocturnal world gives the impression of daylight: colors on the photos range from misty grey and dreamy blue to vivid reds, depicting pathways and clearings in forests, open fields with flowers, and the sea. According to the Israeli born artist, colors may vary depending on the season the photo is taken in, due to changes of temperature. “I started this project some five years ago, and I wouldn’t declare it finished. All thru these years, I ventured out into nature, spending long hours staring into the darkness. Most of the time I went alone, because whenever I took somebody with me, his or her fears were the extra I couldn’t handle, as my own fears were enough to battle with. Being alone in a forest, in the middle of nowhere, can be scary. Darkness was about fears until I found out that fear only lived in my head. Suddenly I sensed that I became a part of nature,” Herman explains his sensatory revelation, adding that he would love to continue his project somewhere in the Nordic countries. “Up North, lights are so different from those in Israel or Europe. In the far north of Norway, it is dark for months at a time – I’d love to work there for a while.”

However, as the artist suggests, the location of the shooting shouldn’t really matter when one looks at the works. He does not want to represent the night but to create a new place and time, not a day and not a night. He also says his art is not for the eye, rather for the heart, and so it should be felt, not seen. “Normally, these strange lights of the night can only be perceived by technology,” explains the curator at the walltext. “Compared to the experience of the real daylight, we perceive odd shadows, moonlight features, color spectrum and shimmering details that differ from sunlight. What I’m willing to do is to create a new reality out of the mystery of the night. These sites never existed for the human eye, they are just snapshots, insights into another reality.” When strolling through the exhibition spaces, visitors will notice that every room is lit differently. “There is a confrontation between the forest images placed in an intensely dark environment with those capturing flower fields and large spring-like open spaces of nature placed in an over-lit room. Forests are usually perceived as dark and shady, even on a sunny day, while open fields are considered light and sunny at all times. By creating this supporting environment, the observer is confronted with his own limitations of perception.” Encapsulating unperceivable or imaginary realities, Herman examines the limits of surrealism and timeless reality. “In a sense, he is researching the virtual world,” notes the curator of the exhibition, Attila Nemes. “Virtual realities, games, simulations, that are so influential to the present, let us seek into areas unknown to the human eye. But Herman does not deal with motion prediction, 3D stereo, lens distortion, time warp and other optimizations for a ‘realistic’ VR experience. He is simply finding the existing ‘virtual’ model of the night and fixing it on paper. This is Herman’s Upside Down, a new Realism in the age of information technologies."

And how does the artist suggest visitors view the exhibit? “When awake, people’s eyes never rest, constantly scanning their surroundings, checking their phones, etc. I encourage everyone to sit down in front of the artwork, and meditate a little – do nothing, just be present. When dedicating a little time of their lives to the installation, calm and still for a few minutes, they may notice details or certain ‘layers’ they didn’t see at first. They should let the artworks grab their mind. And in the end, they’ll be sure of one thing: Nature is perfect. (People aren’t.)”

Rafael Y. Herman was born in 1974 in Be’er Sheva, Israel. The winner of the Prague Photosphere Award in 2015, Herman began studying classical music at the age of six, becoming a percussionist in Philharmonic orchestras, ensembles and rock bands. Following a long stay in New York City, he studied at the School of Economics and Management at the University of Tel Aviv. Graduating in 2000, he moved to Latin America, taking a long research trip through seven countries: photographing Cuban musicians, the Carnival of Bahia and the Zapatistas in Mexico, working with Amnesty International in Paraguay, then studying painting in Mexico City and Chile and becoming part of an artists’ commune. This visual apprenticeship combines vision, metropolitan experience and encounters with uncontaminated nature. In 2003, Herman moved to Milan, showing the project “Bereshit- Genesis” at Palazzo Reale, a project created with a method of his own devising: nocturnal photography without electronic aids or digital manipulation, revealing what cannot normally be seen by the naked eye. This exhibition launched Herman into the international art scene. His works are in prominent public and private collections, including the Tel Aviv Museum of Art, the Salsali Private Museum of Dubai and MAXXI national museum, Italy. Herman’s recent solo exhibition in the magnificent Testaccio pavilion of MACRO museum in Rome claimed great international attention and marked the largest exhibition of the artist prior to the Ludwig Museum solo exhibition in Budapest. Rafael Y. Herman is an invited artist of Ville de Paris at La Cité Internationale des Arts and currently works and lives in Paris.