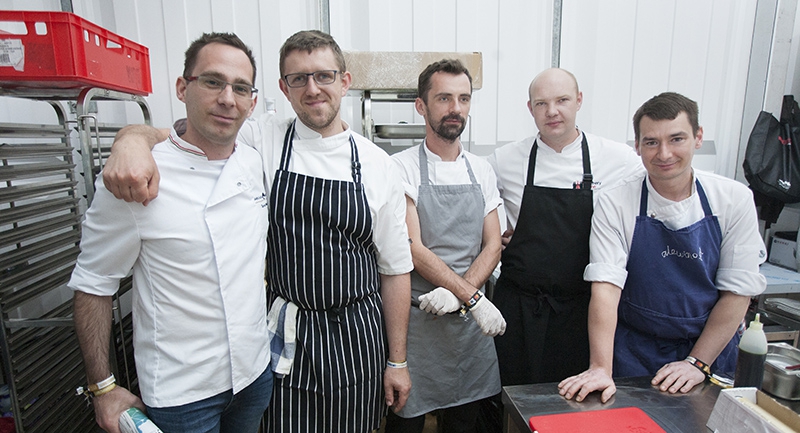 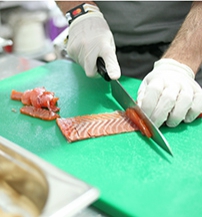 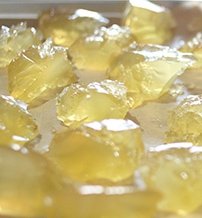 “How Poles catch on the Zeitgeist of the culinary industry, is truly remarkable,” notes chef and culinary expert Tamás Pellérdi, Commercial Director of Eastore Ltd., a company which distributes excellent Hungarian food and ingredients such as mangalitza and goose liver abroad. An enthusiastic fan of both Polish and Hungarian cuisine, Pellérdi – or ‘Mr Foie Gras’ as he is referred to in Warsaw, where he resides – often acts as a propeller to encourage gastronomy-related cooperation and activities, so his presence was more than natural at Budapest’s Gourmet Festival, which this year chose to focus, for one night, on Polish cuisine.
“Organizers invited the chefs of all Warsaw-based restaurants which possess Bib Gourmand-recommendations, to cook together and co-host a dinner party where an eight-course menu (see box) was served, accompanied by a selection of Hungarian wines,” Pellérdi explains, adding that introducing modern Polish cuisine to the Hungarian public is not a novelty in the Gourmet fest’s programs. “Two years ago, Mateusz Wichrowski, the chef of Brasserie Warszawska, was a special guest of the Gourmet Festival, arriving on the invitation of the Polish Institute Budapest and the Polish Embassy Budapest. I suggested that he should present a cooking show with a Hungarian chef, namely Ádám Pohner, winner of Bocuse d'Or Hungary in 2018. Their ‘Dwa bratanki’ (Two Good Friends) show was very popular. In 2017, chef Wojciech Amaro was invited to the fest, representing his restaurant Atelier Amaro which was the first restaurant in Poland to win a Michelin Star. This year, organizers wantedto present Bib Gourmand places and contacted Polish restaurateur Daniel Pawełek, who, via his Ferment Group, owns five restaurants and wine bars in Warsaw, of which three have received the Bib Gourmand recognition: Brasserie Warszawska, Butchery & Wine, and Kieliszki na Próznej. Pawełek asked to make it four, to feature all Bib Gourmand restaurants from Warsaw, and so Alewino was invited too.”

According to Pellérdi, the Polish restaurant scene is relatively young, but it has the dynamics to develop and it is likely to become recognized worldwide. “The country undoubtedly has the foundation to be regarded as a serious performer internationally with everything from street food and gourmet markets to fine dining restaurants,” he says. “The Poles' connection with nature is undeniable. They often go to the woods to pick mushrooms and collect herbs and berries, the tradition of pickling (fermenting) vegetables also has a long tradition in the country. Chefs today tend to recreate long-forgotten recipes and mingle modern cooking techniques with traditional elements,” Pellérdi continues, highlighting how blessed Poland is when it comes to finding the best ingredients: unlike restaurants in Budapest, an F&B manager in Warsaw can easily order and receive fresh fish every morning from the sea and fresh cheese from the mountains. “Another difference, as I see it, is that Polish restaurants are less dependent on tourists, and are mainly full of with residents in Warsaw. On the other hand, Budapest has more Michelin stars. I try to grasp every opportunity to popularize Hungarian gastronomy in Poland and vice versa, and I believe that there’s a lot to learn from each other. I wish for as many collaborations as possible, similar to these recent festivals and expos,” Pellérdi says, concluding, “It is unusual that, in a world of global tensions and conflict, two countries that do not even share a border would maintain such good relations and that their historical friendship would remain intact even during extreme political conditions, since the Middle Ages. I say we should make the most of this friendship, gastronomy-wise. The world should know that there is a culinary revolution going on in Central Europe.”

The European Academy of Gastronomy (an organization established in 1983 which is based in France and cooperates, among others, with the UN and the EU) has recently awarded Krakow with the prestigious title ‘European Capital of Gastronomy Culture.’ Krakow’s restaurants are the only restaurants outside Warsaw that hold Michelin guide’s distinctions – there are 26 such places at this time. Twice as many Krakow’s places were honored by Gaullt et Millau, while 8 were recommended by Slow Food Poland. The city has prepared its own schedule of culinary events for 2019, including a Gastronomy Congress for specialists and lovers of fine cuisine, and a meeting for Krakow-based chefs and celebrity chefs from around the world. Via the innovative “Virtual cooking”, people will be able to follow multiple chefs cooking online, in their restaurants, live. New projects will also be developed related to the cuisine of the royal court, the bourgeoisie and the academia of Krakow. Krakow’s culinary heritage has included street food – ever since the Middle Ages, when simple food was offered to townsmen, merchants and students from portable stalls.