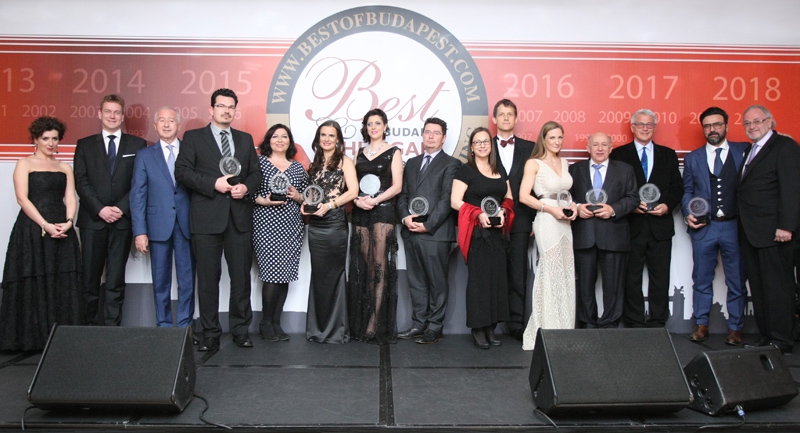 Our special awards go to...

The 23rd Best of Budapest & Hungary Award Gala was held at the Kempinski Hotel Corvinus Budapest on April 2, to honor the individuals selected as the 2015 Special Award winners.

Those outstanding individuals who have excelled in their field, and who received special awards this year, are:

Tibor Rosenstein introduced his restaurant to Budapest at the age of 53, and today, twenty years later he still manages Rosenstein Restaurant, with the help of his whole family. The restaurant is an iconic place, they call it legendary – but the one, who is behind it, is the real, living legend.

Perfectionist, creative, obsessed. These words describe Norbert the best. For the past 10 years he’s been working as the leading chef of Baraka, creating food that affects all the senses, combining traditional and innovative technologies, European and Far-eastern flavors.

The only limit is our imagination, and Fanni’s imagination clearly has no limits, nor does her willpower and work capacity. She opened the first Cake Shop when she was 26. She is the proof that, as a young mother of three, it is possible to manage three pastry shops, publish cookbooks and live a happy and full life.


The gastro-entrepreneur of the year: Gianni Annoni (Via Italia)

Gianni is the one who brought the „dolce vita” lifestyle to Budapest, turning Budapest’s Arany János Street into a little piece of Italy. He believes that at Via Italia every Hungarian feels the Italian tempo.

A fan of Japanese culture, Irma has been part of restaurant Sushi Sei from the beginning – first she became a regular, then the patron and owner. She not only aims for perfection – she creates it. And she does not accept less.

Viator strives to express the hospitality of the Benedictine community of Pannonhalma through gastronomy. Restaurant manager Takács Gábor makes sure that at Viator, not only the body, but also the soul is fed, and that guests leave content, and return.

With its original atmosphere, the Budapest New York Palace hotel serves as the ambassador of the Italian way of living in the Hungarian capital. Kinga Engelbrecht has managed this establishment since 2010. Under her leadership the hotel received the Hotel of the Year Award, and its beautiful New York Café was named the most beautiful coffee house in the world.


Hoteliers of the year in the countryside: Döbröntei Ildikó & Csaba (Káli Art Inn)

Káli Art Inn in the tiny village of Köveskál, in the Balaton Uplands National Park is a place everyone should visit at least once in a lifetime. Ildikó and Csaba, husband and wife are in charge and they treat everyone as their most exceptional guests. This kind of hospitality is really rare to find, and most appreciated.

Zsófi is one of Hungary’s leading culinary stars who introduced gastro-blogging in Hungary. Author of eight cookbooks, hostess of TV cooking shows, she is the founder of the popular “Chili & Vanilia” blog.


Gastro-winemaker of the year: Nimród Kovács

The man, who introduced HBO and UPC to Hungary, decided to put Hungarian wines on the world stage and works hard promoting Hungarian wines in the brutally professional international arena. He believes in Eger and that the Nagy-Eged terroir has superb potential. More than 60 restaurateurs and sommeliers named him as the best gastro-winemaker in 2015.

In addition to the 10 special awards, this year Gábor Ganczer, Zoltán Hamvas and Tamás Széll, received “Special Recognition”, for their outstanding work in connection with the Bocuse d’Or Hungarian and European finals, and Arie Yom-Tov was recognized for opening the Buda Entertainment & Gastro complex in Óbuda, and for the development of the popular Gozsdu Yard on the Pest side.