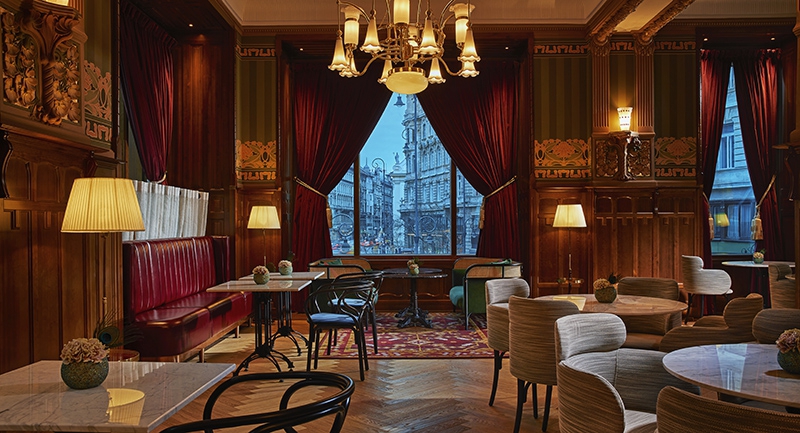 The much-loved institution of Budapest’s history, the former ‘Belvárosi Kávéház’ (‘Downton Café’), returns to Budapest’s  social life after being asleep for decades as Matild Café & Cabaret on May 19 this year.

After a long-detailed renovation period, the 300-seater venue will await guests in Matild Palace as the reimagination of the café originally opened in 1901, echoing the vivid Belle Epoque era of Budapest with the grand café and cabaret shows. The gastronomic concept of the city’s new historical venue was dreamed up by the legendary Chef Wolfgang Puck.

Steeped in history, Matild Palace, the home of the café was built 120 years ago during the Belle Époque era and was developed under the patronage of Her Imperial and Royal Highness Maria Klotild of Saxe-Coburg and Gotha to serve as the social hub of the city.

The two-story café was the most popular center of the vibrant social life of the era, where prominent public figures, journalists, artists used to meet; and where significant pieces of Hungarian literature was born, like some part of 'The Adventures of Sindbad' by by Hungarian writer Gyula Krúdy.

The café was not only the social hub of the city for a long time, but it also had strong symbolism related to a fresh start after the Second World War: this café was the very first business in Budapest to reopen its doors to the residents after the war. The reopened café was a very important message those days, a promise of a new beginning for the people, a press release by Matild Palace says.

The original café was run by the Rónay dynasty for almost four decades and then has lived through different eras. It was the home of one of the most traditional coffee houses, later a restaurant, a casino, and even a nightclub.

Today, the building itself is listed as a UNESCO World Heritage site and has been under monumental protection since 1977. The long and highly detailed restoration work was based on the original plans, and contemporary drawings and photographs also helped the restorers to get a high-quality result, restoring the historic details to the original splendor.