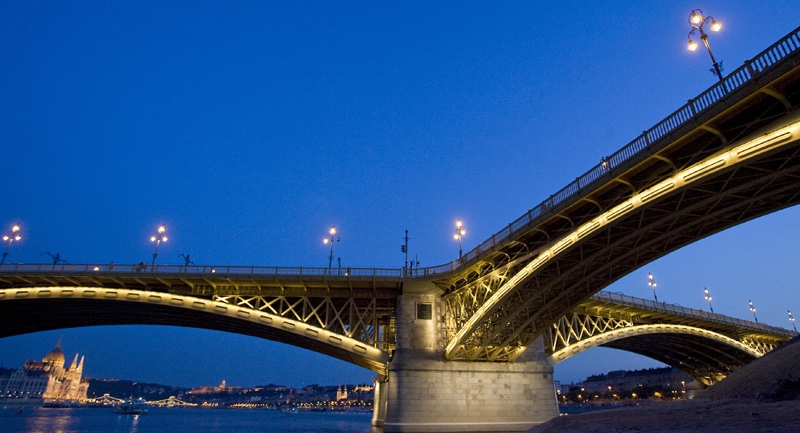 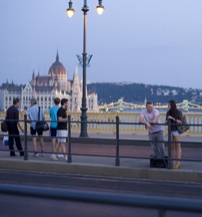 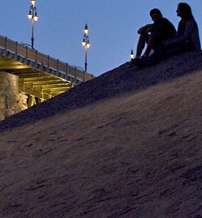 For its construction Chain Bridge was bought off. Eiffel Tower is told to be coded in its framework. This was the first bridge in Budapest that exploded during World War II, only it happened by accident. "Maggie" celebrates its 137th anniversary this year.

By the 1870’s Chain Bridge, the first permanent bridge of Budapest had been overloaded with traffic. It was clear that a new bridge has to be built. However, a contract between the Chain Bridge Company and the city prohibited the construction of other bridges within 8 kms from the existing one, for the upcoming 90 years. As a result of this, the first step in the construction of Margaret Bridge was that the state bought off the company. Construction works started in 1872, following the plans of French engineer Ernest Gouin. Architectural decoration was designed by Wilbrod Chabrol, architect of the French Palais Royal. The statues of the piers, a figure sitting on a prow were made by Adolphe Thabard. The new bridge was inaugurated on April 30, 1876.

As almost all bridges in Budapest, Margaret Bridge has its legends too. For a long time it was believed that the construction itself was designed by Gustave Eiffel, the mind behind Paris’s Eiffel Tower. The reason of this is perhaps that the bridge is often mentioned as a lying Eiffel tower. According to some sources, for example, rotating the bridge it draws the shape of the Eiffel tower. The peculiar, Y-shape of the bridge is due to its connection to Margaret Island. The two parts enclose 165 degree with each other. This connection was inserted to the original plans later, so the extension to Margaret Island was taken in use only on August 19, 1900.

During World War II all Budapest bridges were undermined by the German sappers. On  November 4, 1944, Margaret bridge exploded unexpectedly, right in the afternoon rush-hours, killing more than 400 passengers and 40 German soldiers. The exact reasons of the tragedy are still unknown. The contemporary sources talk about a gas-explosion, while some believe that it was the explosion of German bombs activated by a spark from the trams. The remaining parts of the bridge were exploded by the German six months later.
In 1945 the Soviet army used pontoons to substitute the ruined bridge. Before the inauguration of the reconstructed bridge in 1948 “Manci”, a small, temporary bridge connected the two parts of the city. By the 2000’s the bridge was in an awful condition. However, among other reasons, the reconstruction-progress of Liberty Bridge sat back the renovation. The reconstruction started only on August 21, 2009. The bridge was widened and a bicycle-route was added to it.