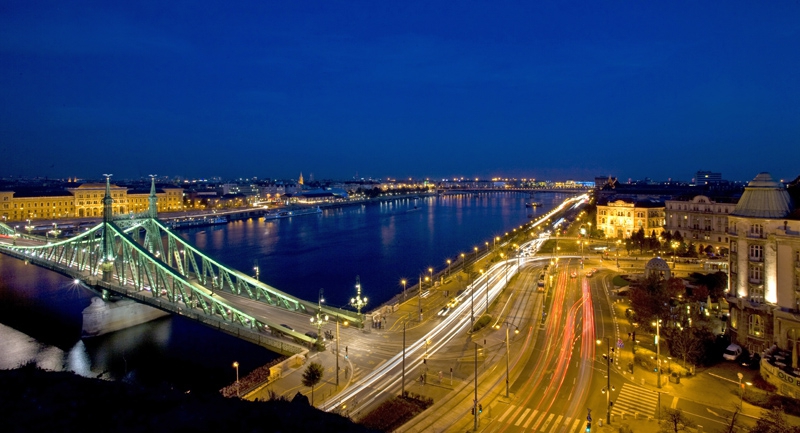 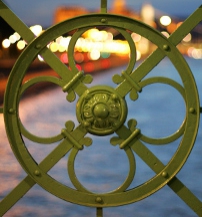 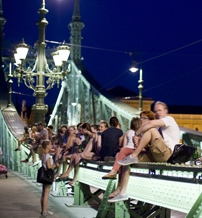 Liberty Bridge might be short, but on the other hand it has a long history and the weirdest stories. Once covered with grass, one of its rivets was inserted by an emperor. Also, people tend to climb it too often.

In 1885 the Hungarian Parliament passed a bill, which gained huge importance in the history of Danube Bridges. According to this act, if the tolls, coming from the other Danube bridges, overrun 650,000 Hungarian forints, the money had to be invested in building a new bridge. Soon enough, constructions on a new bridge started. It was finished and inaugurated for the Hungarian Millennium (1896), and was named after Ferenc József (Franz Josef) Austro-Hungarian emperor with its last rivet, made of silver, hammered in by the emperor himself. This tiny little nail was said to survive everything, even the explosion of the bridge in 1945. However, it disappeared during the revolution in 1956.

Ferenc József Bridge was a kind of a conception-bridge at the time, featuring tram rails, electric and gas lights and uniquely made steel dodge which were the newest inventions at the end of 1800’s. In 1945 the bridge was exploded by the German army. The seriousness of the damages can be characterized by the fact, that a part of the framework of the Pest bridgehead was pushed into the quay. In the spring of 1945, the Soviet army started to build a temporary pontoon bridge, which was destroyed by an icy flood in January. Reconstruction started, and on Aug 20 the renovated bridge was opened, under its new name “Szabadság” (Freedom). The works were completed in a great haste. Although many of the niceties of the bridge, such as the old Austro-Hungarian coat-of-arms on the tops of the stanchions were saved, many parts of the bridge become simpler: the handles were changed, and the frame lost its original green color, due to the lack of paint. In 1980, further renovations were needed. The pavements were badly constructed, and the frame eroded strongly. During the works the bridge got back its original green color.

In 2004, in order to celebrate that Hungary joined the European Union, the bridge was covered with grass, which enabled celebrating crowds to cross it barefoot. In 2007 another great reconstruction started, which lasted for over a year.

Thanks to its trellis-work, the bridge, let’s put it this way: has some potential other Danube bridged could not offer, for strange people. Some of them want to commit suicide while others just want to be famous. In the middle of 1990’s a man, called “Ferike” has become a well-known celebrity among fire-fighters: he was really keen on climbing on bridges, especially on weekends. Unsurprisingly, Szabadság Bridge was his favorite; his actions caused traffic jams, and enormous bills for the fire-fighters.

On August 4-5, the bridge will be closed from traffic. Bring your yoga mat or picnic basket and enjoy free concerts and yoga classes thru the weekend.