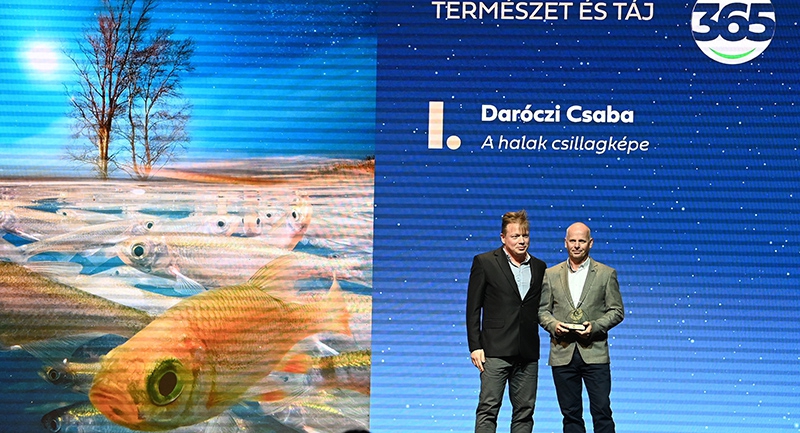 This year, 3,500 entries were received for the competition for amateur and professional photographers. A professional jury of renowned experts selected the winning photos from almost 38,000 entries.

This year again, professional and amateur photographers were invited to participate in the Hungary 365 photo competition in three categories: nature and landscape, built and tangible heritage, and life images. The professional jury awarded three prizes in each of the three categories, with the first prize going to HUF 1 million, the second to HUF 500,000 and the third to HUF 300,000. The winners of the public vote also received a prize of HUF 1 million per category.

According to the jury's decision, the first prize in the Nature and Landscape category went to Csaba Daróczi's The Constellation of Pisces, the second to Tibor Litauszki's Drifting and the third to Tibor Prisznyák's Vision at Dawn. The Audience Award went to Balázs Makai for his image of the Dewy Dragonfly. Milán Radisics received the special prize of the Hungarian Naturalist Association for his series Roxy, our neighbor.

In the built and intangible heritage category, the jury's first prize went to Csaba Daróczi's The House of Hungarian Music, the second to Gábor Novák's Ködtakaró [Fog cover’] and the third to Ilona Hodossy's Up the Peak. The Audience Award went to Dóra Herman's The Fairytale Castle. The special prize of the Hungarian Tourism Agency went to Tibor Holczer's photo Pentele Bridge.

István M. Kerekes won the first prize in the Life Pictures category with his series entitled The Magic of the Moment, Márton Mohos Búcsú was second and Andrea Kiss was third with BuSHOW. The Audience Award was won by Péter Orbán's photo from the Front Row. The special prize of the National Association of Large Families went to Nándor Szabó for his photo entitled The Way of Life, while the special prize of the Opera House went to Sándor Zsila for his series entitled The Old Lady.

The aim of the photo competition is to present the natural and built heritage of our country, the celebrations and everyday life of the people living here, and all the things people can be proud of in Hungary, through the lens of the artists and with a unique vision. The initiative also gives participants the opportunity to show and promote their works to the public.

The jury was chaired by photographer Ottó Kaiser, and included Kossuth Prize-winning photographer Éva Keleti, photographer László Haris, a distinguished artist and member of the board of the Hungarian Academy of Arts, environmental researcher Imre Potyó, winner of the 2020 competition and Nature Photographer of the Year in 2018 and 2020, and photographer Tamás Rizsavi.