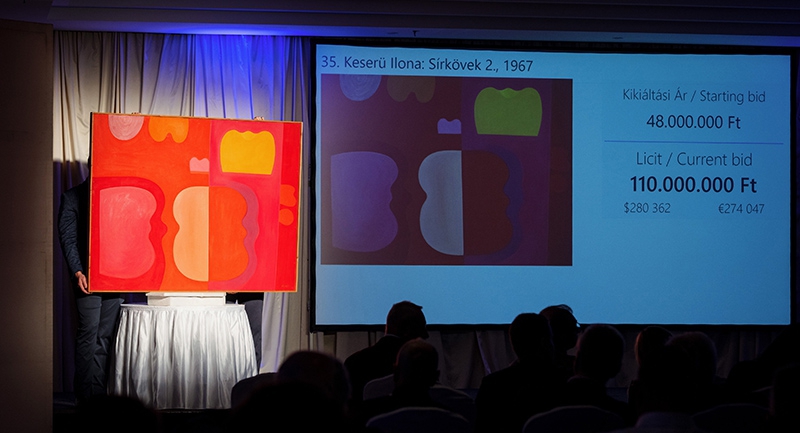 A painting by Béla Kondor and one by Ilona Keserü sold for over a HUF one hundred million each at the first contemporary auction at the Kieselbach Gallery in Budapest.

According to the gallery's statement, the auction, which was attended by a large number of visitors on Friday evening, set unprecedented records in Hungary.

Béla Kondor's painting ‘Launch of the Artificial Cricket’ quadrupled the painter's previous lifetime record by hitting HUF 120 million. The auction started at HUF 75 million and climbed to the record amount.

The press release issued on Saturday quotes gallery director Tamás Kieselbach as saying that Kondor's work is an exceptional rarity: "a golden icon, comparable only to the King of the Hornets, a collector's masterpiece of Kondor's oeuvre. It was a sensation when it appeared two decades ago, as it is today," he pointed out. The extraordinary icon has lived up to expectations, including the duels between online bidders, he said.

‘Gravestones 2’, a 1967 painting by Ilona Keserü, a world-renowned representative of the neo-avant-garde, soared – from HUF 48 million – past the auction record for living Hungarian painters, also held by a Keserü painting, ‘Marilyn and the Sea’, that had been sold for HUF 55 million. The now record-breaking Gravestones 2 is one of the painter's most distinctive motifs, one of the first ever treatments of the heart-shaped gravestones in the village of Balatonudvar.

According to Tamás Kieselbach, Keserü's large, red-pink-orange painting is a key work of exceptional quality in both scale and language. This is the first time the painting has appeared on the art market, and its discovery is an exceptional sensation, he stressed.

Another of Keserü's paintings, ‘Signs (Floating Forms)’ from 1976, sold from a starting price of HUF 8.5 million for HUF 20 million.

According to the gallery, a domestic oeuvre record was broken by Lajos Kassák's 1958 abstract ‘Composition #7’, repatriated from the United States, a picture that now went from HUF 42 million to HUF 55 million. The painting came to an American collector, Singer, in Ohio from a 1960 exhibition of the legendary gallerist Denise René.