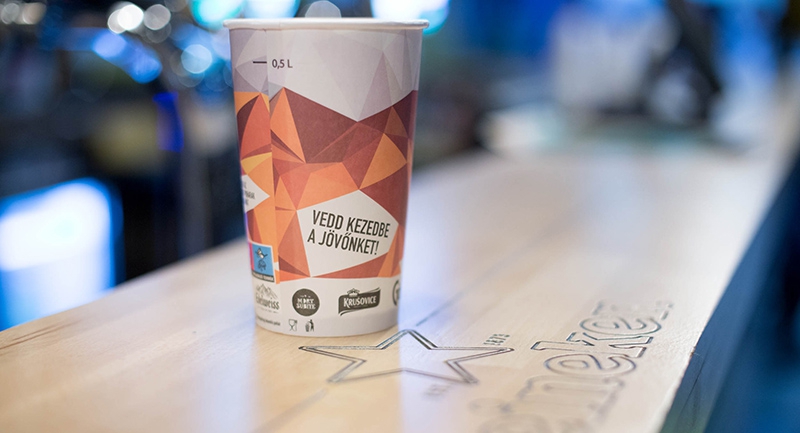 HEINEKEN Hungária is still leading the way in sustainability goals and their fulfilment. The company was first global beer company to remove PET packaging from its portfolio and, reacting to consumers’ demands, switched to paper cups before the regulations enforcing the move came into effect. According to plan, they will switch to carbon neutral production by 2030 and the company’s entire supply chain is expected to emit zero harmful gases by 2040.

In 2018, HEINEKEN Hungária was the first company to launch a campaign raising awareness of the importance of the kinds of cups and bottles consumers drink their beers from. Among the large beer brewers on the market, HEINEKEN Hungária was once again the first to remove PET packaging from its portfolio, saving the environment from 200 tonnes of plastic annually. Starting from this year on, the company has been producing and distributing beer in glass, beer kegs or aluminium that can be reused an infinite number of times.
The company has been decreasing its waste and plastic production since 2019. Switching from plastic cups to ecologically degradable paper cups that the company procured from a local supplier was a significant step forward, driven by consumer demand. The raw material used is made exclusively of primary fibres, without chemical processes, and is free of any contaminants, so the cardboard and its coating can be composted and recycled. When selecting the paper cup material for replacing plastic ones, HEINEKEN Hungária paid attention not only to minimizing the materials’ environmental impact and choosing a local supplier, but also sought to make sure that drinking beer remains the same enjoyable experience that consumers and partners were used to.
The paper cup designed especially for HEINEKEN has enough room for the beer head and the marking of the gauge is clearly visible not only on the outside but also on the inside of the cup – to the delight of bartenders. The manufacturer was also careful to use the paper cups as a communication platform and thus had speech bubbles printed on them conveying various messages about sustainability. Initially, HEINEKEN Hungária plans to introduce paper cups in 1000 HoReCa units across the country. So far, 13 000 of HEINEKEN Hungária partners expressed their will to use the new paper cups. Based on the precontracts made, HoReCa units will soon receive nearly 3 million paper cups countrywide, of which 850 000 have already been delivered to about 450 partners of HEINEKEN Hungária. Thanks to the improved distribution system and a more responsible waste management, the three million paper cups precontracted will be suitable to replace 10 million plastic cups.
"HEINEKEN aspires to be not only the world’s most innovative beer brewer, but the greenest one, too. We are positive that sustainable development and operation are the only way forward which, besides creating new workplaces and contributing to the UN Sustainable Development Goals, will make our brands even more appealing to consumers,” said CEO of HEINEKEN Hungária, Nikos Zois, who thinks Hungary plays a pioneering role in this process.