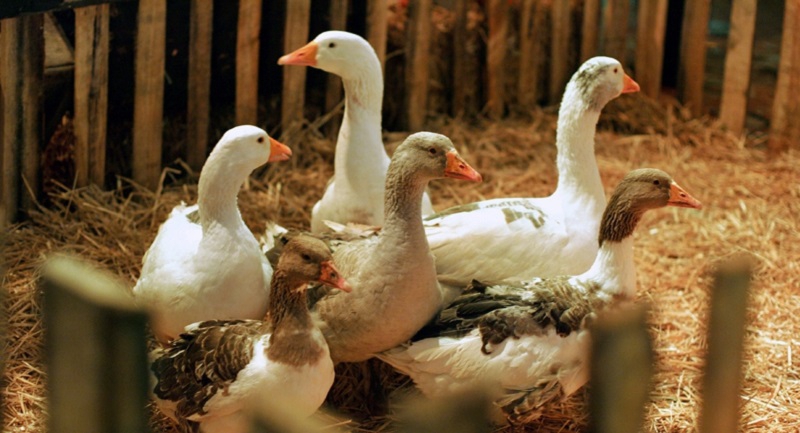 Geese, Wine and a Saint - Martin Day celebrations In Hungary

Martin Day (November 11) traditions can be traced back several centuries. In the Middle Ages Martin Day was one of the most popular festivals while today the Martin Day goose has its renaissance. The question arises, what are the roots of this tradition and what is the original relation between geese, wine and Saint Martin?

The double identity of a Roman soldier

The yet to be canonized Martin was born in 316 as a son of a Roman tribunus somewhere near today's Szombathely (Savaria), later, at his father's request, he became a soldier in the legion. He excelled not only through his valor but also through his goodness and his compassion towards the ill and poor. According to legend, one winter he caught sight of a beggar shivering by the city-gates of Amiens and he pitied him so much that he cleft his cloak and gave one half to the needy poor. The following night Jesus Christ appeared in his dream revealing he was that beggar and it was him Martin helped. Following this vision, Martin decided to be baptized at the age of eighteen. He left the army when he was twenty and joined Hilarius, bishop of Poitiers, who soon chose him to be a smaller decorum of the Church and commissioned him to spread Christianity. In about 371 the people and the clergy appointed him to be the bishop of Tours. When he heard the news of being nominated for this position, in his great humbleness he hid himself in a geese hutch from the deputy coming for him. However, the poultry made a huge noise by their gaggling and fluttering, revealing his cover. Finally, Martin resigned himself to the public will and, due to the geese's intervention; he accepted the position as a bishop. He is believed to be a convincing and trustworthy clergyman who led a strict, self-denying life. He had the first Christian chapel of the town built, and, as tradition has it, his philanthropy, goodness, clemency, simplicity, justice and eloquence made him extremely popular. He died in Candes, near to Tours, sometime between 397 and 401. When canonized, he became the patron of soldiers, travelers, captives, prisoners, peasants and shepherds and turned out to be the most popular saint of the Middle Ages.

Following his death, the cult surrounding him spread like a storm in the Christian provinces of Europe, thus in Pannonia as well. His memory is kept in place-names, prayers and altar-pieces, and today, festivals and museum programs are also focusing on Saint Martin.

Where to go to enjoy these, and to learn more on Saint Martin?

On November 11, churches pay tribute to Saint Martin’s activities, and folk traditions are revived. Martin’s day is the first day of winter, when new wine is tasted, “Martin geese” are killed, and the chest-bones of poultry are used to forecast the weather. The cult of St Martin in Szombathely is ever stronger, and celebratory events include different programs such as religious meetings, processions with lanterns, dance evenings, concerts, lectures and exhibitions. Szombathely’s restaurants await their guests with gastronomic specialties with abundant goose-dishes being listed on the menu.

All over Europe people light devotional candles in the workshops around November 11 because of the early nightfall; this is where the idea of the lantern-lit procession originates from, a custom revived in Szombathely in 2000. After a festive ceremony held in the Cathedral, the procession makes its way to St Martin church, traditionally led by soldiers of the Savaria Legion dressed in Roman military uniforms. Besides the wreathing of Saint Martin’s statue and the holy mass, the town council confers its major honors on the selected ones at a ceremonial event on Martin’s day. The Great Saint Martin Day Fair has been organized during the first weekend of November, organized in Szombathely’s Village Museum. The fair is attended by vendors from all over Hungary, all selling high quality, most typically handmade products. On the great stage of the village museum people can see ethnographic and folklore programs including comedies and various musical performances typical of fairs; and, in each year, a community bearing Saint Martin’s name is invited to the festivities. The fair is made even more atmospheric by the stalls selling pies, roast chestnut and goose dishes as well as different drinks including top quality wines.

The Open Air Museum (Skanzen) in Szentendre also plans to organize its annual Saint Martin's Day New Wine and Goose Festival on November 7-8, offering gastro and cultural programs. Organizers encourage visitors to check the museum’s website for COVID-19 updates: “At the moment it seems we’ll be able to present this season-closing fest, which can be a perfect outdoor family program,” they say.

In 2005, in order to present the outstanding monuments of the life and cult of Europe’s most popular saint, the road leading from Szombathely to Tours was declared an European Cultural Itinerary by the Council of Europe.  We suggest you choose a short version of the thematic tour, staying int he vicinity of Szombathely. The so-called Saint Martin Historical Walking Route starts from the local Calvary Church and leads to St Martin Church. It has been designed to revisit the venues related to Szombathely’s Early Christian traditions. The works of art presented at each of the stations along the route help us remember particular episodes from St Martin’s life.