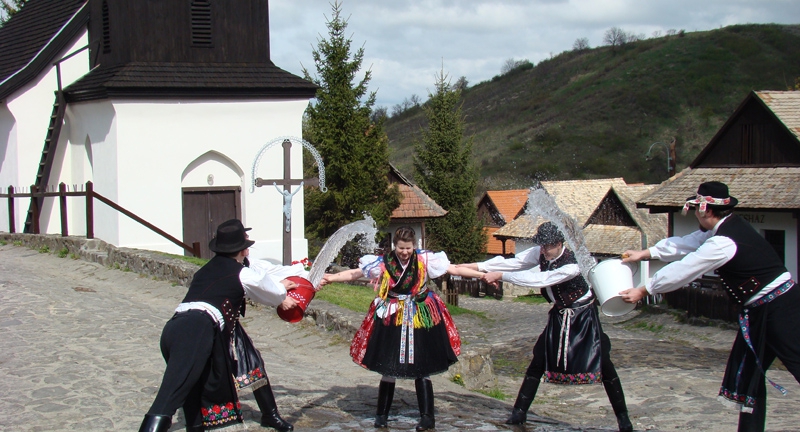 Each year a special Easter festival takes place in Hollókő. Proclaimed as a UNESCO World Heritage Site, the small village is a gem of the so-called Palócföld region and is an outstanding example of a deliberately preserved traditional settlement.

In the postcard setting of the Cserhát Hills, about 100 kms north-east of Budapest, lies the picturesque tiny little village of Hollókő with its two main streets and mere population of 650. Its cobbled streets and small white houses are noted for the round tiles that resemble giant coins. Their small gardens are enclosed by picket fences and elderly ladies dressed in colorful traditional costumes sit on the porches under the shade of trees…. Any tourist would imagine that Hollókő is lost in time. “But Hollókő is not a place that time has forgotten,” remarks Mayor Csaba Szabó. “Instead, we like to refer to it rather as a place of eternity as the isolation of our village preserves a sustainable unique style. Here traditions, dating back several centuries, have been preserved and despite the increasing number of visitors each year, our municipality is determined to maintain this heritage. Hollókő 's greatest value is its population, members of the local ethnic 'Palóc' community, who speak their own unusual Magyar dialect, and have some of the most traditional folk customs and colorful costumes in Hungary. In fact, the entire village is a living museum. And there is always something to see in every house,” claims the eloquent Mayor. According to him, this destination is especially nice to visit during the Easter holidays, this year on April 15-17, as Hollókő 's traditional Easter celebration revives the oldest Hungarian Easter traditions, including pouring whole buckets of fresh but freezing cold water on girls, occasionally. Visitors can also learn how to create the famous Hungarian painted Easter eggs. “It is a time when young and old all wear their ornamented folk dresses and participate in a major folklore festival, featuring day-long folk programs, including traditional songs, dances and cuisine." This year's Easter program will also feature Félix Lajkó, the Kerekes Band and Gyuri Ferenczi & the Rackajam. In front of the Hollókő castle, a medieval camp will be set, and visitors will be able to get acquainted with medieval traditions, costumes, games and weapons.

The devil and the ravens

The history of Hollókő dates back to the 13th century, following the Mongol invasion, when a castle was built on the nearby hill. The name Hollókő comes from the composite word deriving from 'holló' - meaning raven, and 'kő' - meaning stone. The locals like to believe that it originated from the legend where András Kacsics, the lord of the castle standing on Pusztavárhegy, kidnapped a pretty maiden, whose nanny happenned to be a witch. The girl was locked in his castle. In order to set the girl free, the witch combined forces with the devil himself. The devil's sons transformed into crows and disassembled the castle stone by stone, in this way the lady became free. The crows carried the stones into the hill of Szár and built the castle of Hollókő at its present location. Ever since, the symbol of the village nearby is a raven which holds a rock in its beak.
Hollókő and its 140 hectares bucolic envronment was announced a nature protected site by Hungarian law, already in 1977. Ten years later, the village was added to UNESCO's World Cultural Heritage list, and has ever since catered to tourists, both domestic and international, with its hospitality, handicraft shops, quaint house-museums and restaurants. The village also features a weaving mill, a village museum, a post office museum and a doll museum.