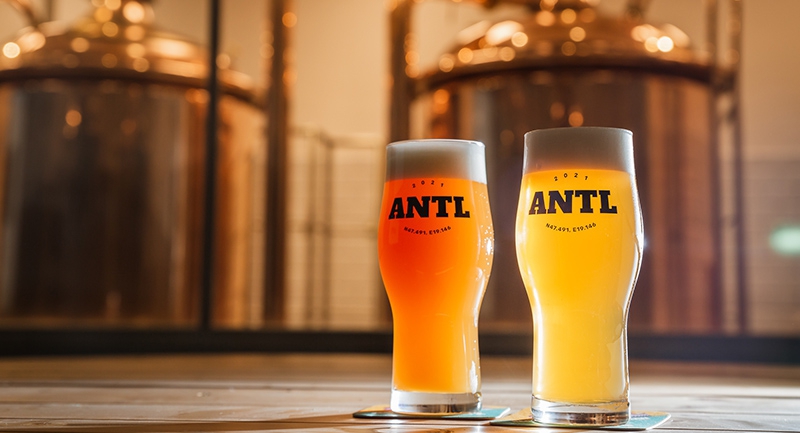 Dreher Breweries have built a Beer Workshop, operating independently of its historic brewhouse, to serve as creative recipe workshop as well as the home of a new Hungarian brand. The ANTL brand, focusing on the hospitality sector, pays homage to its founder with its first two beers: the Vienna Style Lager is a modern interpretation of the beer style that earned Antal Dreher the moniker "Beer King" close to two hundred years ago, and the English Style Summer Ale recalls his study trip to England, which led to the knowledge sharing that came to characterize Dreher.

In Dreher’s iconic neoclassical brewhouse, a single brew means hundreds of hectoliters of beer, while in the old barrel filling building where the Beer Workshop is located, one brew is just a few hectoliters. The smaller size of the equipment and greater flexibility of the technology gives the brewery team more freedom to experiment.

"From its founding day, the history of Dreher Breweries has been one of continuous innovation. First, it was using the Kőbánya cellar system and, uniquely for its day, the artesian wells, to produce the lager beer invented by Antal Dreher. Then, the early use of steam and cooling technologies, and later for example, the pioneering introduction of glass bottling and aluminum kegs. We continued to build on this tradition in recent years through product innovations and fresh collaborations, and to all this we are now adding new momentum with the Beer Workshop and the ANTL brand," said Gábor Békefi, CEO of Dreher Breweries.

ANTL launches with two beers initially, with the types of beers changing several times a year. The mildly bitter, unfiltered ANTL Vienna Style Lager is a modern take on the beer style that not only earned Antal Dreher the title of Beer King, but also brought him worldwide market success. Both its aroma and taste are characterized by the spicy hops in the background, contrasting its malty sweetness.

During the young Antal Dreher's European study tour, most brewmasters were reluctant to help the professional development of the future Beer King. Eventually, the owner of a medium-sized brewery in England brought the young Dreher under his wings. As a result, Dreher decided to keep his factory open to anyone interested in the science of brewing. ANTL English Style Summer Ale is a tribute to this story. With a pleasant citrus and tropical fruit hop aroma, this top-fermented and unfiltered summer ale is characterized by harmonious bitterness, rugged hops, and a hint of malty sweetness.

"Our team has had the opportunity to think more freely about new beer styles and recipes before, but we have always had to consider the huge scale of the factory. The Beer Workshop opens whole new dimensions of experimentation for us. We will introduce new brews several times a year, which means continuous experimentation and development for the ANTL brand," added Máté Mihály, Innovation Brewer at Dreher Breweries, head of the Beer Workshop.