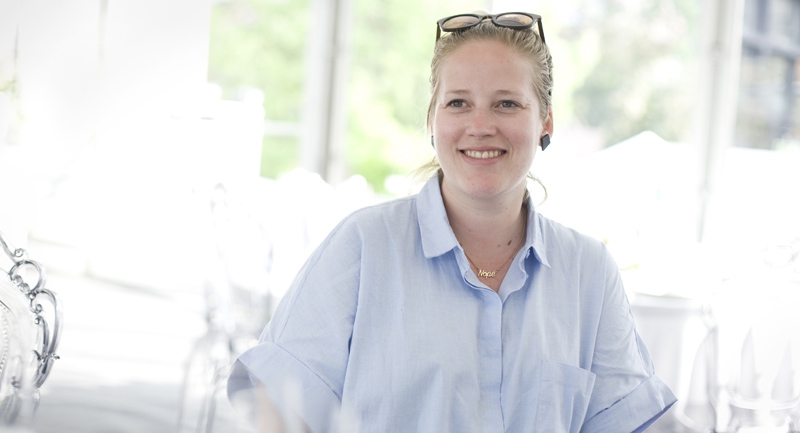 Changing the world through food - Interview with Kamilla Seidler

About 15 years ago, Danish cuisine was completely unknown outside the country. Today, Denmark is one of the leading gastronomic destinations in the world. The ‘Michelin Guide Nordic Countries 2018’ awarded no less than 31 stars to 26 Danish restaurants, in the cities as well as in the countryside.

The dramatic change came with the Nordic Cuisine Movement, commonly attributed to Danish food entrepreneur, TV chef and culinary ideologist Claus Meyer, who founded his restaurant ‘noma’ in 2003, and who, ten months later, along with his head chef René Redzepi, took the initiative to organize the Nordic Cuisine Symposium. Politicians, scientists, farmers, food industrialists, teachers, researchers, retailers and international chefs all gathered to explore the question: what would it take to become one of the greatest food regions in the world, and what would be the benefits further down the line? Right before the symposium started, Meyer wrote a Manifesto, along with some of the greatest chefs in the Nordic region, during an 18 hour workshop. “As Nordic chefs, we find that the time has now come for us to create a New Nordic Kitchen, which in virtue of its good taste and special character compares favorably with the standard of the greatest kitchens of the world,” the Manifesto stated. Proposing a cuisine based exclusively on products sourced from the Nordic terroir, in addition to a strong focus on health and ethical production, the Manifesto was first implemented at noma, which began soaring high, gaining international fame: it was elected best restaurant in the world, four times.

Meyer, meanwhile, started a foundation called Melting Pot, originally to teach prisoners in Denmark how to cook. As the ambitious initiative grew bigger, Meyer began planning to cross the borders of Denmark in search of a development country where he could open a culinary school to train generations of cooks who would later be able to educate their own communities; his choice fell on Bolivia. He aimed to apply the basics of the Nordic movement in a restaurant in La Plaz, that could be an equivalent of noma, where newly trained local chefs would work. He looked for a Danish chef to lead the kitchen, and this is where my interviewee, the Copenhagen-born Kamilla Seidler came into the picture. “Fighting poverty through deliciousness,” that was the goal of Meyer, who hired Kamilla in 2012. “It was a challenge to get used to Latin-America, and especially Bolivia, a country of mountains that is radically different from Copenhagen, which is flatter than my hair,” Kamilla said earlier in an interview. (Indeed, at an elevation of roughly 3,650 meter above sea level, Laz Paz is the highest de facto capital city in the world.)

But, as she says, she has always liked travelling and living abroad, so in the end, she considered living in Bolivia manageable. The fact she speaks fluent Spanish, also helped. Gustu finally opened in April, 2013, headed by Camilla and her friend, Michelangelo Cestari, an Italian-Venezuelan chef, who was hired as Gustu’s C.E.O. “We wanted to follow the ‘0 kilometer’ philosophy: working exclusively with ingredients planted, raised, grown and processed entirely in Boliva - ingredients that were indigenous in the country, but were novel for those generations currently living in the city. Our aim was to generate respectful relationships with each of our suppliers, seeking to consolidate the Bolivian productive chain, beginning with the boost of fair business activities. Each and every one of us are responsible for the environment around us, we seek to take advantage of the resources offered in a sustainable manner, ensuring the implementation of green practices,” Kamilla resonates the credo of the restaurant, which, after an un-easy start became one of the best restaurants in South America: it was chosen Nr. 1. in Bolivia and the 14th best in Latin-America, while Kamilla herself won the ‘Best female chef of Latin-America’ title in 2016. When ‘The Dane of the Andes’, as she is often referred to saw that her team was ready to take over, she decided to move on, as her plan was never to stay forever. She stepped down as executive chef of Gustu after 5 years, and embarked on a world-wide journey she named ‘The Kamilla Seidler Expedition’, teaming with food festivals, gourmet shows and pop-ups, to popularize Bolivian and South American cuisine. As part of this tour, she was invited to Budapest and attended the Gourmet Festival held in May 17-20, to prepare a five-course Latin-American dinner for the Hungarian audience. “I seriously believe that the philosophy behind Gustu (which is first and foremost a social project) could be exported into another environment, any environment, really,” she highlights, adding that in Bolivia, they started with a small culinary school, and today, the foundation runs 10 schools in Bolivia and two in Colombia, while the goal remains the same: empower and improve professional skills and competencies of young Bolivians, offering tools and appropriate working environments, which will encourage the leaders and entrepreneurs of the future.

Looking for a new challenge, Kamilla started to work for the Food Organization of Denmark (FOOD), a non-profit organization established to promote and develop Danish & Nordic food & gastronomy. FOOD coordinates, amongst others, the ‘Nordic Sustainability 2.0 project’ which is supported by the Nordic Council of Ministers and runs in 2018. “Basically, our goal is to put social sustainability on the gastronomic map of Scandinavia,” she notes. “I’m glad that I could join a movement in my home country which tries to act as a catalyst for social and culinary change, and that I can work on projects such as the ongoing Freja campaign which aims to improve equality in kitchens across Scandinavia. The food revolution in Denmark hasn’t ended yet, there’s still a lot to do to merge the exploration of deliciousness with sustainability, raising awareness of biodiversity, completely reshaping the way we eat, and what we offer for those who visit Denmark."

Kamilla Seidler was born in Copenhagen, Denmark, in 1983. She began working in a bakery at 15, and studied at the Copenhagen Hospitality College. She has worked in some of the world’s best kitchens, including Mugaritz in San Sebastián and Belmond Le Manoir Aux Quat’Saisons in Oxfordshire, and Paustian and Geist in her native Copenhagen.