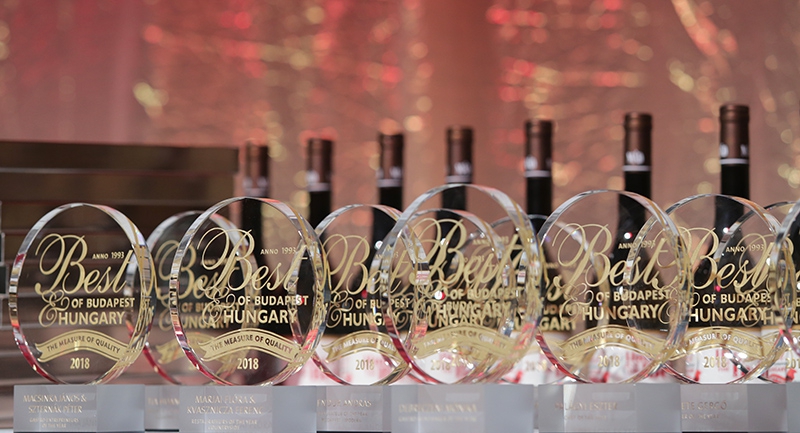 Frigyes Vomberg can be credited with elevating Hungarian gastronomy to the European level, through teaching, coaching and as a chef. In recent years, he has prepped the Hungarian teams participating at the Bocuse d’Or competitions. He believes that Hungarian gastronomy can be brought to a new level if young people receive adequate training, because they will become the talents of the future.

We rarely see two families working together harmoniously in the hospitality business, certainly not for very long. Péter Szternák and János Macsinka, and their wives are the exception. Thanks to them, more and more people visit Eger, not only to tour the historic castle that the city has always been famous for, but also to get a table in Macok or Brumbrum, or a room at the Imola boutique hotel (all located at the foot of the castle). János who is often called the ‘Chef of Eger,’ and Péter, the host, await those looking for culinary delights, great wines and perfect hospitality in Eger.

Restaurateur of the year in Budapest – modern category: András Gendur

It is always a challenge to establish a strong client base of repeat guests, especially for a hotel based restaurant – even if the place is located at Budapest’s famous Andrássy Avenue. András Gendur has experienced ups and down, refurbishments and chef changes, but he still managed to keep La Perle Noire at the forefront of Budapest’s gastro scene. The hotelier and restaurateur knows that offering exquisite cuisine and service is something that should never be compromise.

Since their foundation in 1990, Budapest’s Hong Kong and Taiwan restaurants have become household names on Budapest’s gastronomy scene. One tucked on a quiet street in district 9 and the other on district 13’s Béke út, these restaurants cannot be called centrally located. Owner Ying Tianhua, or, as most people call him, Tao, wasn’t looking for a posh downtown venue where tourists flock. Instead he was seeking the right environment for quiet, comfortable dining. The Belgian-born Chinese owner, who first visited Hungary as a tourist in 1986, returned in 1989 with friends, and that was when he fell in love with Budapest, by accident. Literally by accident, as one of his friends lost his passport, so they were obliged to lengthen their vacation. By the time the problem was solved, Tao was in love with Budapest. Tao comes from a huge family, with every member involved in the catering sector. “We were raised in our parents’ restaurant, we all have an insight of what service means and how to build a regular clientele on good food and consistent great service.”

Restaurateurs of the year – countryside: Flóra Marjai and Ferenc Kvasznicza

Created, opened and led by Flóra Marjai and Ferenc Kvasznicza, Pajta has turned into a place of pilgrimage both in the gastronomic and cultural sense. Located in the beautiful valley of the Szala brook in Őriszentpéter, the bistro symbolizes the harmony of man and nature in its design and intrinsic values. According to the owners, Pajta is an incarnation of their passion for the Őrség region of Hungary, which, in their mid-term plans, will include a hotel.

Chef of the year: Eszter Palágyi

The young chef of Costes, Eszter Palágyi, is the first person in Middle-Europe to receive a Michelin-star under the age of 30. When Guy Savoy visited the restaurant, he allegedly remarked, “If in such a high-level restaurant the chef is a woman, she must be a very ballsy one”. Eszter started out as a pâtissière at Costes, and her talent and dedication soon took her to the next level. Playfulness, based on fine dining and continuous novelty is a major criteria of her cuisine. Her dishes go beyond the general rules of physics. She bravely exposes traditional Hungarian dishes to the cooking technology and processes of the French cuisine.

Pâtissiere of the year: Dóra Szalai

Originally an economist, Dóra Szalai was the first to open a macaron pastry shop in Budapest, trusting that the city would fall in love with this colorful, fragrant delicacy. Even as a child, she loved baking, and learning the basics of baking from French pâtissier Pierre Hermé’s cookbook, so she decided to master the art of macaron-making. Once she had learned everything about macarons in Paris, she returned to Budapest and opened Chez Dodo in 2014. Ever since, Dóra has been making macarons enthusiastically and persistently, regularly coming up with new flavors, for the delight of her growing number of customers and fans.

Baker of the year: Gergő Fekete

Gergő Fekete has a mission: to create ‘real bread’, that does not include artificial ingredients. Upon graduating from Edinburgh Napier, where he learned hospitality and human resource management, he trained to be a baker in Scotland. Afterwards, he decided to top up his baking techniques by traveling around the world, working at the best bakeries in France, Germany, Denmark, the U.K. and the Netherlands. In 2015, he returned to Budapest and opened his bakery, Artizán – even the name suggests that everything is hand-made there.

Originally an economist, Mónika Debreczeni has been engaged in winemaking since 1995. With her husband, Pál Debreczeni and an international team of experts, she established Vylyan Winery, and after the sudden death of her husband in 2004, she took over the management of the estate in Villány. She is a member of the international WSET wine academy (Wine and Spirit Education Trust, London). Mónika is the soul of the winery which celebrated the 25th anniversary of bottling their first wine, just a few months ago. The winery, that produces over 700.000 bottles of wine per year (of which 12% is exported), is a founding member of the Ördögkatlan (Devil’s Cauldron) Festival.

Gastro-photographer of the year: Antonio Fekete

The difference between other gastro-photographers and Antonio Fekete is that before he pursued his carrier as a photographer, he worked as a chef for 20 years. One day, he realized that while food is only temporary, photographs last forever, and by shooting gastro-photos he could follow his dual passions for gastronomy and photography. He knows how and when to capture the best moment – when a plate of food ‘shows its best face.’

Gastro-blogger of the year: Kristóf Steiner

Coming from a hippie family, actor-journalist-broadcaster Kristóf Steiner made a decision in 2009 to leave Hungary for London, and later moved to Tel-Aviv, where he officially became vegan. He established his blog called ‘Kristóf’s Kitchen’ in 2015, where he continuously uploads new recipes and his own experiences about food. He also published his first cookbook in the same year, which became a huge success. Based on these recipes, he often organizes cooking courses, both in Budapest and Tel Aviv. He lives by the mottos ‘Do no harm’ and ‘Live, and let live’, and he urges his growing number of fans to do so.

Leading the Hilton Budapest (member of the Danubius Hotel Group) for over a decade, Zoltán Árvai successfully carried out the hotel’s top-to-bottom renovations - which was the most comprehensive renovation in the history of the hotel - remodeling and refurbishing all of its 322 rooms and suites as well as the public areas and meeting rooms. One might think that following such large-scale renovations, which brought a healthy mix of cutting-edge technology and breathtakingly beautiful interior design to every corner of the hotel, the GM would want to lay back a little, but he thinks differently. In his new position, leading Hotel Hungaria and the Danubius Hotel Arena, we may see him again with a hammer or a drill in his hands, as renovation is needed at both hotels.

Only a few hoteliers can shape the place they lead according to their taste. Ágnes Molnár-Mersitz, owner of Kosbor Pension does not strive to cater to every need: there is no ‘sauna world’ or TV on the premises of her stylish countryside pension, but still (or perhaps for this very reason) people who stay there, find perfect relaxation and maximum comfort, in the tiny village of Magyarszombatfa, neighboring the Őrség National Park.

Special recognition for excellence in hospitality

Balázs Csapody has always believed that there would be a demand for quality hospitality at Lake Balaton when he opened the restaurant Kistücsök in Balatonszemes. He was right, and inspired many to follow his path. Balázs has a good eye for talent: Ádám Pohner joined the restaurant in 2017, and the young and confident sous chef, heading the Hungarian team, finished 12th at the Bocuse d’Or Finale in January, 2019.

Japanese cuisine is very unique and complex, yet the Hungarian chef of Budapest’s Sushi Sei restaurant, Zsolt Kurkó has mastered it so well that he was able to enter the world’s most high-class Japanese gastro-competition, the Washoku World Challenge, competing for the title of the ‘best foreign Japanese chef’, where he finished 4th. To participate, he had the support of the owner of Sushi Sei, Irma Héder, a true fan of Japanese culture, who always aims for perfection, and does not accept less.