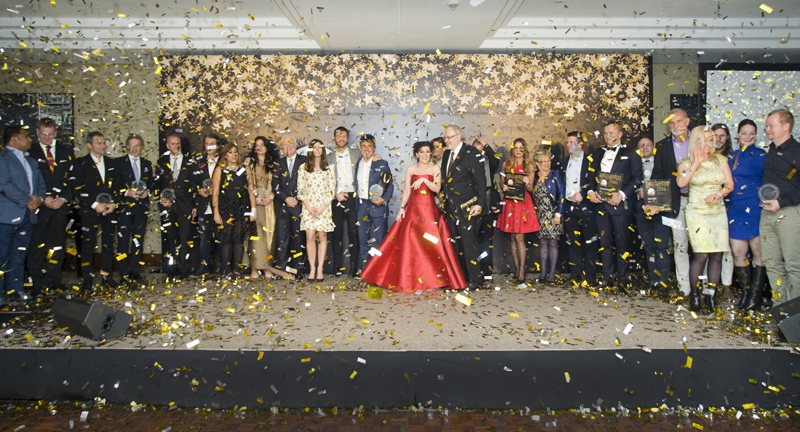 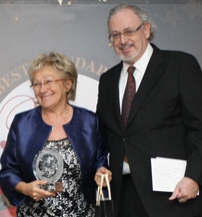 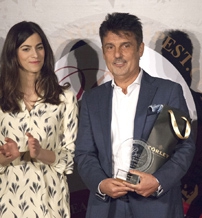 The 24th Best of Budapest & Hungary Award Gala was held at the Budapest Marriott Hotel on March 25, to honor the individuals selected as the 2016 Special Award winners.

Those outstanding individuals who have excelled in their field, and who received the Best of Budapest & Hungary special awards this year, are:

Alice's mom ran a restaurant in Paks where, as a young girl, she was standing on a step stool behind the bar, pouring guests a glass of Hungarian red or white. Later on, she probably held every possible position known in the restaurant business, slowly working her way up the ladder. Along with her family, she’s been managing her restaurant Remíz in Budapest for the past three decades, where once a year she cooks traditional Paks dinners: Christmas fish soup, stuffed cabbage and foie gras meatballs.


Árpád László - Gastro-entrepreneur of the year

Should anyone ever devote a whole book to restauranteur Árpád László, it would surely be a robinsonade, an adventure story at its best. There is a hero and an island too. Only this hero’s ships have never wrecked, and he is, as he put it, surrounded by wonderful people. His Robinson restaurant on the City Park Pond celebrates its 27th anniversary this year. Árpád knows that times change, and so do the guests’ requirements, so he needs to renew from time to time. “Ideas are constantly spinning in my mind”, says the restaurateur. This is how he came up with the Columbus and Spoon restaurants, plus the BRGR hamburger bar and Vendetta.


Hubert Hlatky-Schlichter - Restaurateur of the year in Budapest – modern category

Owner of a number of cult places in Budapest such as KIOSK, Babel Budapest, Terasz, KIOSK BEACH and Terem, Hubert always aims for perfection. According to him, the key to a successful operation and a happy life is to give back from all the good he has received, therefore he and his team often organize charity events. His highly sought after fine-dining restaurant, Babel Budapest is a place that shows respect for the country’s traditions, paying homage to familiar classics, but interpreting them in the unique and contemporary style.

The former "Old-Buda," with its rickety houses, workshops, stores, little pubs inviting bohemians, artists and students, disappeared more than twenty-five years ago. Citizens of Swabian and Jewish origin used to live here together with their Hungarian neighbors in mutual appreciation. Restaurant Kéhli, surrounded by similarly old houses, retains an atmospheric little island oasis of the past among the monotonous rows of modern cubical houses, serving guests ever since 1899. Today, it is the hospitable Cecei-Horváth family, making sure that the restaurant remains true to its century-old traditions.

When István Pesti, as a chef of restaurant Tanti, was presented the Michelin star in March 2015, hewas already considering the idea of moving to the countryside for a while. Shortly afterward, he moved to Tata with a long-term plan, believing that the future lays in rural gastronomy. Leading the kitchen of Platán Restaurant & Café, working in the most wonderful natural and historic setting on the banks of the Old Lake lined with sycamore trees, István’s dishes are easy to recognize as he is considered by many as the chef who creates and presents the most beautiful dishes in Hungary.


Tamás Flesch - Hotelier of the year in Budapest

Tamás is one of the the owners and Managing Director of Continental Group, which, as a hotel management company, is a definitive force within Hungarian tourism. Over the past 10 years, the group opened the first boutique hotel in Budapest named Hotel Parliament, and launched Hotel Palazzo Zichy and Hotel Moments Budapest. Within two years, three more new hotels will open: Clark Hotel, D8 Hotel Budapest and the Hotel Four Elements. As a consultant, Tamás is also known for his persistent lobby work for the New Congress Center, and the development of the rail and road connections of the Budapest Airport.


Ádám Barna - Chef of the year

At primary school in Békés county, Ádám already knew he wanted to become a chef. Succeeding, he worked in Toronto and London, and almost settled in Salzburg, Austria, for good, as head chef of the five-star Hotel Oberforsthof’s kitchen. That’s where he learned that a regional approach isn’t only a marketing trick but the path to understanding the underlying methods of cooking. Back in Hungary, he now flourishes at St. Andrea Wine & Gourmet Bar, with the goal of presenting something exceptional every day, striving for excellence.


Anna Nagy - Confectioner of the year

Similar to the smallest princess in the folk tale who said to her father that she loved him as the people love salt – Anna uses the most wide variety of unusual ingredients for her heavenly desserts.  With eight years in the business, two years at the New York Café and her past six years at Salon, she masterfully plays with tastes, colors, textures and shapes. In 2014 she won first prize in the Sirha Budapest dessert contest and last year in Rio, she represented Hungary at the Hungarian House set up for the Olympics. She constantly strives for improvement, hates to come in second and never allows herself to copy ideas from other confectioners.


Szabolcs Szabadfi - Baker of the year

Szabi, the baker – as many people call him – is the most dedicated baker in town who is deadly serious about his profession. To function, those basics he needs are flour, sourdough and coffee. He barely sleeps and his mission is to find the recipe of the best white bread in the world. Born in a charming little town named Kőszeg, he wanted to discover the world, and worked ten years abroad in Austria, Malta, Italy and Sweden. Three years ago he opened the Panificio il Basilico (a fusion of a rustic Italian bakery and a bistro) in Budapest. He is most proud of his three children, his Labrador dog Winnie and the pizza he makes.

Although Tamás has worked in the hotel and catering business for over 20 years now, he doesn’t regard himself as a professional hotelier. Originally a construction engineer, his approach towards hotel management is a little different: he observes everything thru the eyes of a very discerning guest. The moment he opened his than 6-room hotel and restaurant in Siófok, it became a success story. Today, Mala Garden**** Superior Hotel Siófok has grown into a wellness hotel with 18 rooms and 4 suites. Inspired by the modern architecture of the island of Bali, it truly stands out among the hotels of Siófok.

Any renowned gastro events we attend, András Jókúti’s timber stature (he played water polo for a long time) stands out from the crowd everywhere. Not only in Hungary, as Andrew travels and ‘eats’ the world – publishing reviews on his blog ‘Világevő’.  The showman role suits him well; he proudly represented Hungary as MC at the European final of Bocuse d’Or, the world's most prestigious cooking contest, and also at the world final in Lyon.


Zoltán Kertész - Gastro-winemaker of the year

Kertész Zoltán does not come from a multi-generation winemaking family. When he decided to establish a winery, he had to start everything from scratch, and thus the Székesfehérvár-based entrepreneur slowly became a winemaker and owner of the Kertész Family Winery in Etyek. He fell in love with bubbles – these days, consumers’ favorites are the excellent Kertész frizzantes and sparkling wines. The unique design of his bottles with their transparent labels has become a trademark and won the ‘most beautiful bottle design’ title. A true hedonist, Zoltán loves wine paired with other culinary delights, and his wine tasting events at the Mediterranean-style Carla Pezsgőház are well-known. More than 60 restaurateurs and sommeliers named him as the best gastro-winemaker in 2016.