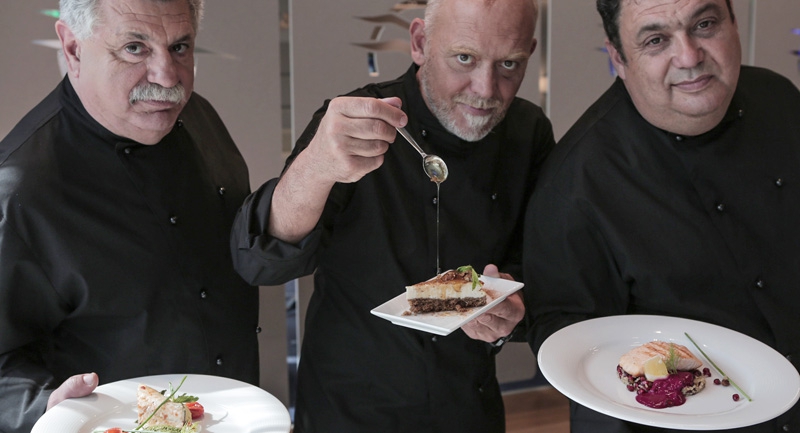 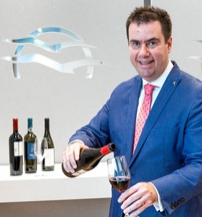 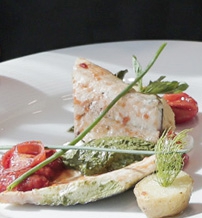 Lefteris Lazarou, Christoforos Peskias and Stelios Parliaros create the new Business Class menu, while Master of Wine Konstantinos Lazarakis is in charge of the wine selection.

AEGEAN, consistent with its commitment to continuously improve its services and promote Greece’s tradition, natural beauty and culture all over the world, announces its collaboration with three distinguished Greek chefs. Together, they will take the stories of Greek gastronomy on a journey across the globe, through the new “Gastronomics” initiative.

For the first time ever, AEGEAN brings together three major representatives of modern Greek gastronomy, Lefteris Lazarou, Christoforos Peskias and Stelios Parliaros, who will help create the new Business Class menu, giving passengers the opportunity to try dishes that carry the aromas and flavors of Greece. Embarking alongside them on this new gastronomic journey is Greece’s first ever Master of Wine, and AEGEAN’s wine consultant, Konstantinos Lazarakis, who will also help the chefs showcase the unique Greek gastronomic identity.

The new menu will be available at every international destination on AEGEAN’s network, revealing a piece of Greece’s gourmet culture. Flavors from Crete, Naxos, the Peloponnese, and ingredients from all over Greece, are combined in the hands of the three top chefs, creating a menu of over 40 different dishes that highlight local products and wines from both small and large-scale producers, from every corner of the country, presenting the most authentic piece of Greece.

With this initiative, AEGEAN wants to offer, besides the very first smile, the first tasty “welcome” to Greece, as well as the last gastronomic “goodbye” to visitors returning to their homeland. AEGEAN’s collaboration with the three chefs will continue throughout 2018.

At the same time, by essentially investing in a high-quality menu, AEGEAN strengthens and adds more value to its passengers' travel experience. The philosophy of the “Gastronomics” initiative is part of the program to further enhance the services offered on AEGEAN flights and the company’s long-term commitment to promote Greek gastronomic tradition and strengthen local communities by promoting local products and producers through its network, as well as through actions and initiatives.

AEGEAN’s journey in Greek gastronomy started in 2010, through the program titled “Discover Greek Cuisine.” For 8 years, the company has been promoting and informing passengers on selected Greek wines, in collaboration with its wine consultant, Konstantinos Lazarakis,MW. From the beginning of 2010, more than 450,000 bottles of high-quality wine from 85 Greek wineries have been offered to AEGEAN flight passengers.

AEGEAN’s main goal is to promote Hellenism and showcase all the reasons that make Greece unique, across the entire globe.

About the Chefs and the Master of Wine

Lefteris Lazarou was born to a father who worked as a ship-chef. He traveled alongside his father since the age of 15. He was the first chef to integrate fish & seafood cuisine to high-quality restaurants, introducing common fish to the public, giving them a leading role in his dishes. He has won many awards and has been awarded a Michelin star for his restaurant “Varoulko Seaside.” He composes his dishes using his creativity, influences from his travels, his passion for excellent raw materials, highlighting modern Greek cuisine.

One of the greatest Greek chefs, Christoforos Peskias was born and raised in Cyprus. He trained under Ferran Adrià and Mark Menaux, while he considers Charlie Trotter his mentor. Since 1992 he has been in Athens and his name has been linked to some of the city’s finest restaurants. Combining tradition with modern gastronomy trends, nostalgia and futurism, Christoforos Peskias knows how to leave his unique mark.

Stelios Parliaros has a unique way of combining different ingredients and techniques from around the world, using the exceptional raw materials produced by Greece. He studied at L’ École Lenôtre and Ecole Ritz Escoffier in Paris, at the Valrhona Academy in Lyon and at the famous Fauchon. Ever since he took his first professional steps in 1979, he had his own, unique identity and helped redefine Greek pastry. Today, he is considered as one of the best Greek Chef Pâtissiers.

Konstantinos Lazarakis MW was born in Piraeus. He studied Mechanical Engineering in the National & Technical University of Athens and Jazz Music in Aeolian School of Music. He became the first Greek Master of Wine in 2002 and one of the less-than- 360 in the world. He is also a current member of the Council of the Master of Wine Institute (IMW) and the current Chair of the Trips Committee. He has received the Villa Maria Award for outstanding performance on the Viticulture paper and the 13 th Bollinger Foundation Medal ever, for excellence in Wine Tasting. In 2004 he founded Wine & Spirits Professional Centre LTD, the Greek subsidiary of the most influential educational organisation in wines and spirits in the world, the Wine & Spirit Education Trust of London. In 2005, Mitchell Beazley publishing house in London released Konstantinos’ book “The Wines of Greece”, one of the four wine books short listed for the Andre Simon Memorial Award 2006. In 2006 he received the “Noval Award” as the MW Communicator of the Year. In 2012, he was awarded the “Honorary Weinakademiker” title by the Austrian Wine Academy for promoting wine education, the 13th person ever to be honoured in such way. He is also a certified Fine & Rare Wine Specialist. He is a co-organiser and president of the Balkan International Wine Competition, which takes place in Sofia, as well as the President of the Thessaloniki International Wine and Spirit Competition. He is a member of the International Food & Wine Society, as well as a member of its Wine Committee.