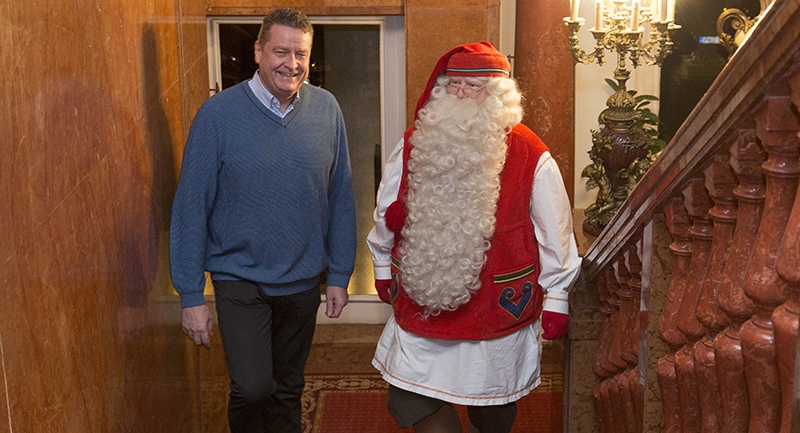 A guardian of Hungarian traditions - Interview with Peter Knoll

The General Manager of Budapest’s Gundel restaurant, the most iconic gastronomic establishment in Hungary, received a job offer in early 2019 that was too good to turn down. He was asked to take over the helm at the Hilton Budapest located in the historic Castle District. His professional experience amassed as the head of luxury hotels around the world compelled him to accept the challenge.

“Having to run these two prestigious establishments means I’m truly trusted but it also comes with a lot of pressure. The expectations of the public are very high as both places are deeply rooted in the country’s history. When you change history because you are making renovations and upgrades, or you adopt an innovative approach with an eye to the future, everyone has a marked opinion and meeting all the expectations is virtually impossible,” Peter Knoll, Managing Director at Gundel Restaurant and General Manager of Hilton Budapest says. The two establishments are part of the portfolio of the Danubius Hotels Group.

Gundel is a symbol of elegance and gastronomic excellence in Hungarian culinary history and the 125-year restaurant is a de rigueur place to visit for tourists with a knack for fine dining. “I felt honored when I was asked to manage the Gundel, an establishment with a history of 125 years and a landmark in this country. This is the only restaurant in Hungary to be declared a Hungarikum and this shows its value not only in Hungarian gastronomy but for Hungarians in general. This is, however, not the first time that a German is running this house as Mr. Gundel himself also hails from Germany,” Peter Knoll says. The Hilton Budapest is an equally iconic establishment, which opened in 1977 as the first Hilton hotel behind the Iron Curtain. Many Hungarians still tell Knoll that during the Communist era they would stroll by the Hilton and peer through its windows to have a peak at the Western world. “The biggest challenge in my job is balancing between tradition and innovation,” the executive says.

After renovation time for innovation

Although the Hilton is an institution in Budapest, competition has intensified in recent years as new, exquisite establishments have appeared on the market. The major renovation program implemented over the past 4.5 years has transformed the Hilton into a modern, stylish hotel, which can compete with all the other five-star hotels in the city. With the renovation completed, the hotel is now gearing up for the innovation phase, Knoll says. The plan is to open a sky bar on the top of the Hilton that will be different from similar bars in Budapest due to the unparalleled view. “There is no other place that offers an almost 360-degree view of downtown Budapest and where one can literally gaze down at the roof tiles of Matthias Church and down into the Fisherman’s Bastion, not up. The completion of this project is one of my most treasured objectives at the moment,” Knoll says smiling.

The executive entertains ambitious plans to “take the Gundel into the 21st century.” Joining forces with Executive Chef Zsolt Litauszki, they are working on making the presentation more modern and adopting a lighter, more modern approach to traditional dishes. The size of the restaurant is also a challenge; the Gundel boasts 130 seats while modern fine dining establishments generally have a capacity of up to 40 people. “We are in the brainstorming phase of how to turn the Gundel into a leaner and more up-to-date restaurant while retaining the historical features that render it unique,” Peter Knoll says. Expectations are fragmented between local and foreign guests, traditionalists, who come to the Gundel because of their memories and clients driven by Litauszki’s innovations.

“I am originally a hotelier; I have been working in hotels over the last 35 years and I only started working in standalone gastronomy in 2018. The two establishments are equally important to me; being a true hotelier, I am extremely fond of managing the Hilton. But when I started to work in the Gundel, the restaurant conquered my heart and it still does. To be entrusted by Hungarians with such a treasure as a foreigner is a great show of trust, which I respect highly,” Knoll says.

Gearing up for the festive season

The St. Martin Day goose festival is the harbinger of the festive season at the Gundel and at Hilton Budapest. According to the legend, on St. Martin’s Day (November 11), one can infer prosperity or hardships, health and good weather for the coming year. As the saying goes: “Whoever doesn’t eat goose on St. Martin’s Day, will go hungry for the entire year.” Goose dishes enjoy a great tradition at Gundel and naturally the goose liver will be a star of the season, peppered with expertise, noble tradition and an endless passion for food. From December 1, visitors at Hilton Budapest can enjoy the special Advent Brunch while Gundel awaits guests with its celebrated Sparkling Sundays. The Sparkling Sunday is a novel approach to Sunday brunch, with cold appetizers and desserts displayed on a buffet table, while the hot appetizer, soup and the main course of choice are served at the table, classic Gundel-style. Both establishments offer amazing New Year’s Eve programs. Gundel will host a ball upstairs while the restaurant will serve an exclusive eight-course gala dinner with the Gundel Orchestra performing music from famous films and musicals as well as classic gypsy songs. Those preferring a rowdier way to greet the new year, should head to the Hilton where a big party with a spectacular ABBA show will be the highlight of the evening. The hotel’s Láng Bistro&Grill will treat guests to an exclusive buffet dinner featuring the chef’s specialties, unlimited drinks, smooth jazz and a stunning panorama.

Home away from home

Knoll first came to Hungary in 1995 for work and returned to Budapest for various jobs in the hotel industry in 2002, 2007 and 2017. Tired of living in rented places, he decided to buy his own place in downtown Budapest in 2007. “Most of my friends are here, my family appreciates Hungary very much, they come to visit me on a regular basis. Because Hungary is so dear to me and my family, we have decided to celebrate my mother’s 80th birthday in Budapest. When I first came to Budapest in 1995, I started as an expat but less than a year later I was asked to take over the sales and marketing department of the hotel I was working at. The owners told me I was the ideal candidate because Hungarians respected me and did not consider me a foreigner. I felt at home in Hungary from the very beginning and the years I have spent away from my home country have turned me into a true Europener."