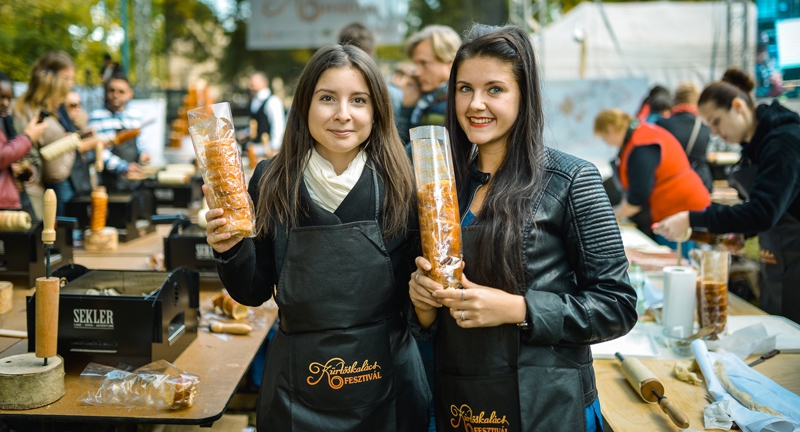 The country's best hobby Sekler Cake Baking team will also be selected at this year's Sekler Cake (Kürtőskálács) Festival, during the weekend of October 13-15. The hostess of this mouth-watering gourmet event is Rozina Wosssala. "This year is an anniversary year for the popular gastronomic festival, since we have been organizing the three-day Sekler Cake Festival for 5 years now. To this end, we will be offering many new program elements for our enthusiastic visitors, the most striking being a new venue for the festival- the lush, wooded Chestnut (Gesztenyés) Garden in Buda. The number of booths has also been increased and nearly 25 booths will be preparing this traditional Hungarian delicacy, including the traditional version, gluten-lactose-free, healthy versions, desserts made from Sekler cakes, mini and giant biscuit variation, and many more. This year, we bring new lyophilized flavors to the general public such as: Crunchy strawberry, wild blueberry or a really facsinating cappuccino sekler cake, but the new hit product of the festival is likely to be the Double Raspberry Sekler Fondue inspired by Ildikó Keresztes. We are also getting ready with different toppings such as mango-chocolate, raspberry-chocolate and white peach-chocolate topping, which are all heavenly on top of the hot, charcoal-baked Sekler cakes. Of course, the usual favorite desserts will also be present. Visitors will have the chance to taste Sekler ice-cream and Sekler Cream cakes", we learned from the organizer of the event, Tünde András.

The most exciting new addition this year is the “Relax Park”, an area where visitors can comfortably sit and wait for their Sekler Cakes to be ready, instead of standing in long annoying queues. Since the cakes are made fresh, it takes a minimum of 5-8 minutes and if there are many orders ahead of yours, even longer. This innovation allows you to relax and be entertained while you wait. You will receive an SMS to let you know when your gastronomic delight is ready. Besides the heavenly Sekler Cakes, there will also be a Yard of Charcoal Grilled Foods where you can munch on great grilled foods if your sweet tooth has been satisfied. There will also be a varied program of almost continuous live music and many activities to keep the little ones occupied, such as puppet shows and storybook readings.  For all the detailed programs and activities, check out their website.